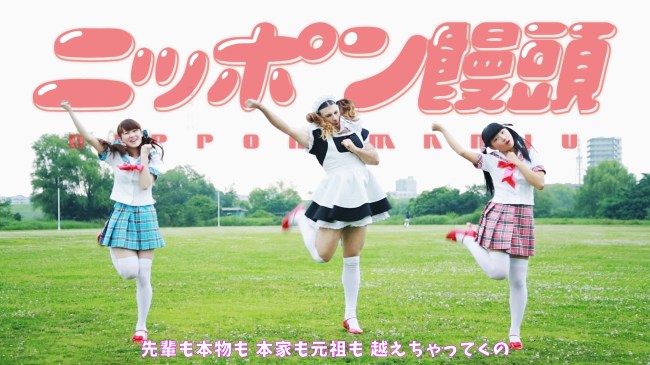 Yes, you read that correctly: Japan’s biggest metal band features two underage girls, and a bearded, cross-dressing singer. Ladybaby, which formed earlier this year in May, has unsurprisingly become an overnight sensation in Japan, and may very well become an overseas phenomenon sometime soon.

In an interview with Vice, Ladybaby’s “frontman” Ladybeard (he refers to himself as a “five-year-old girl”) discusses the group’s rise to fame, his transition from a wrestler to singer, and being a guy of subversion since his teen days living in Australia. There’s some standout quotes from the feature, such as:

Can you talk a little bit more about what it’s like to go into your persona?
If I don’t get myself completely amped and ready to knock a house down and kill everyone I see, then the show is flat. Especially because what I do is still so far out of my comfort zone. You’ll notice there’s no other Caucasian pro-wrestlers dancing like little Japanese girls. Before the show, I just want to run and find stuff to smash—storm around. I have the girls hit me a bunch of times. Everyone hits me. But I do the same thing before I wrestle.

So, I’m curious, what does the transgender community here think of you? Really, if they have a reaction at all, it’s that it kind of has nothing to do with them. They think it’s cute, and that’s as deep as it goes. Me personally, with my solo stuff, I was surprised by how much support I got from them when I came to Japan because I think what I do could easily be misinterpreted by the community as a parody of what they take seriously.

How do you bring out your inner five-year-old girl?
It’s there all the time.

Ladybaby’s aesthetic probably isn’t too (if at all) surprising in Japan. This is the same country that’s given us Babymetal (a metal group fronted by three teenage girls who’ve shared the stage with Metallica and Slayer) and NoGod (a metal group whose androgynous bass player has made many fans wonder if they’re male or female, as well as inspired many bass covers from fans across the world that dress similar to the artist), each band heavily influenced by Kawaii culture and, of course, metal.

Anyways, check out the video for Ladybaby’s latest single, “Nippon Manju,” below. And if you live in New York and want to see the band’s U.S. debut, you’re in luck — they’ll be performing at SOBs on October 11.