Over the weekend, rap fans received a pleasant-ish surprise when Jay Electronica’s Just Blaze-produced, long-shelved debut album Act II: The Patents Of Nobility leaked online, just months after the elusive New Orleans rapper released his collaborative album with Jay-Z. Fans had long given up hope of hearing the long-promised Act II, which gestated for nearly a decade before being mysteriously vaulted by Jay El, Just Blaze, and Roc Nation. Instead, Jay Electronica released A Written Testimony as his debut album, a move some fans criticized for its heavy reliance on Jay-Z’s participation.

However, fans have seemingly responded much more positively to Act II. As a leak and without the pressure of the “debut album” tag, it’s possible that Act II is avoiding the level of scrutiny it might have had otherwise, which was the source of Jay Electronica’s anxiety about releasing it, to begin with. Just Blaze confirmed that the leak was legitimate, although he clarified the leaked version wasn’t the “final” version of the album.

Started to make the rounds a few days ago then went full on last night. Just checked a bit of it. It’s not the final version at all but yeah.. it’s real

That didn’t stop Jay Elec from giving thanks to his hardcore fans who downloaded or streamed the leaked project. “All praise is due to Allah,” he wrote. “Thank y’all so much, man. Y’all got me over here crying.” As is his way, he eventually deleted the tweets but HipHopDX saved a few screenshots, which you can see below. 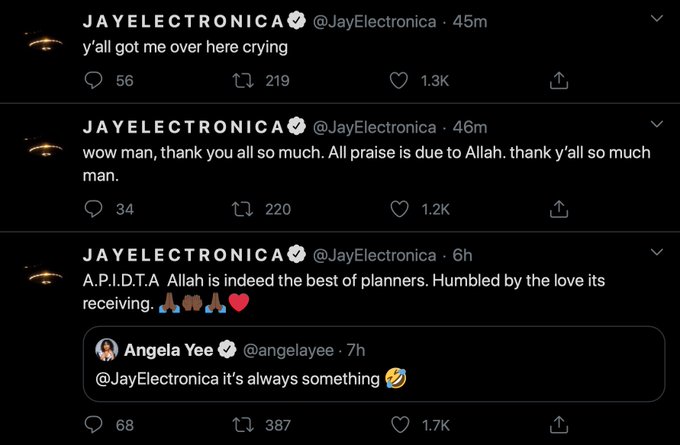 Jay El also promised that the album would eventually make its way to Tidal pending sample clearances. Jay’s manager Lawrence “Law” Parker uploaded the project to his SoundCloud for the time being and tweeted a link.

'Act II: The Patents of Nobility (The Turn)'

UPDATE: The album has officially been released on Tidal. Check it out here.