KANYE WEST and KIM KARDASHIAN are sitting up in bed after a long day. She’s been filming her reality show and making appearances to support her various products and services, and he’s been trying to focus on his new album — now called “Waves” — while dealing with the fallout from his recent Twitter rant, especially related to Amber Rose’s tweet accusing him of enjoying “fingers in the booty.” Kim is reading a book. Kanye is scrolling through his Twitter mentions. He’s very upset.

KIM: Honey, put down your phone.

KANYE: I can’t, Kim! Do you see what these people are saying about me?

KANYE: Then why’d he say it?! That’s it, I’m gonna Twitter another tweet to tell everyone I don’t do that stuff Amber said.

KIM [still not looking up from her book]: That’s a bad idea. It’ll only make it worse.

KANYE: Well, what am I supposed to do then? Just let… [looks back at phone]… Raptor_Dong_Carl call me “Kram-ye West?”

KANYE: Because he thinks I like things crammed in my butt, Kim!

KIM: I’m sorry. Honestly, the best thing you can do is just ignore it until it goes away, then release your album and let that speak for you.

KANYE: Good idea. And I can change the title from “Waves” to “No Butt Stuff.”

KIM: What? No. That’s a terrible idea.

KANYE: I need to clear the air!

KANYE: I don’t enjoy it!

KANYE: [typing frantically on phone] … What? No.

KIM: Kanye, you really need to let this go. 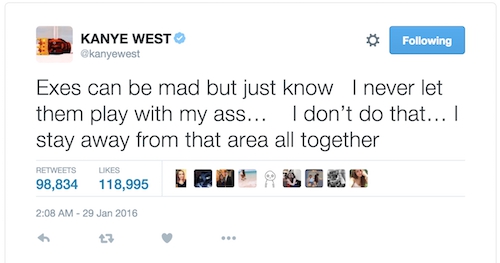 KIM KARDASHIAN hears the notifications on her phone trickle in slowly at first, then speed up rapidly until the phone vibrates off her nightstand. She sighs, flips her phone to silent, and turns off her light to go to bed.