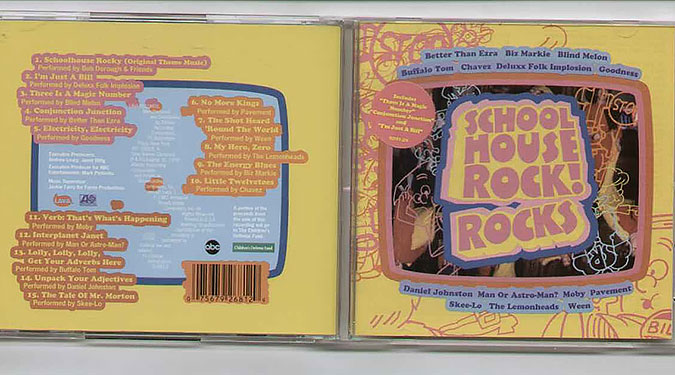 You may be familiar with Schoolhouse Rock!, the little cartoon interstitials that aired during Saturday morning cartoons on ABC from 1973 until 1985. Along the way, they used musical ditties to teach children all sort of things about math and grammar, and, occasionally, how a bill becomes a law. They were quite popular at the time, although for a certain audience any familiarity with them likely stems from parodies or homages produced by a generation of people who grew up with the cartoons. Remember that episode of The Simpsons with the song “Amendment To Be” from that cartoon that replaces Itchy and Scratchy briefly? It’s like that, basically.

Now, if somebody were to tell you that in 1996, an eclectic group of musicians came together for a tribute album wherein they sang some of the most beloved songs from Schoolhouse Rock!, would you believe them?

The album was called Schoolhouse Rock! Rocks. While you may not be surprised to find out this exists. Or maybe existed? You won’t find it on streaming services, and you can’t get your hand on the album unless you buy a used version somewhere.

This is the neither the first nor the last concept covers album featuring a variety of musicians. But most of these albums are pretty awful, and the musicians they feature are generally exceedingly obscure. Schoolhouse Rock! Rocks is not one of those albums. It includes several musicians that were quite popular, at least in indie circles, at the time, and even some bands that remain much beloved to this day.

Some of the choices are obvious. Daniel Johnston does a cover of “Unpack Your Adjectives,” a song written simply enough to teach young kids is essentially indistinguishable from an actual Johnston tune. Biz Markie is an oddball known primarily for the supremely silly “Just a Friend,” so him popping up to do “The Energy Blues” jives, as well. Man or Astro-Man?, a band that operates under the guise that they are aliens sent to Earth to play surf rock (you may recall them being mentioned by Joel when he returned to the Satellite of Love in the season 10 premiere of Mystery Science Theater 3000) did the obvious thing and played the song “Interplanet Janet.”

It’s a solid cover, and that’s another reason why this album is worth honoring, in addition to its obscurity and novelty, there are some really good songs on it. The single for this album (yes, there was a single) features “No More Kings” by Pavement, which was actually also included in their special reissue of the band’s Wowee Zowee album. The song is about the beginnings of the revolutionary war, and the Declaration of Independence. Pavement has a bevy of amazing songs, but here’s the thing, and this is a statement being made with all sincerity: “No More Kings” is one of the best Pavement songs. It’s fantastic. Granted, this isn’t surprising as pretty much every Pavement song that isn’t “Carrot Rope” sounds good, but “No More Kings” also really works as a Pavement song.

Some of the musicians on this album have fallen into what is essentially obscurity, and perhaps weren’t even all that popular or well-known at the time, while others were popular for a time, but didn’t have much staying power, like Buffalo Tom, The Lemonheads, and Blind Melon. Then, there’s Moby, who actually saw his notability increase since the time Schoolhouse Rock! Rocks came out.

Yes, the songs on this album were originally written to teach children some fairly basic lessons. That should be to its detriment. They are, however, infectious songs by and large, and the musicians performing them are talented enough to make the most out of them. If you have ever wanted to hear Ween do a straightforward, rocking take on “The Shot Heard ‘Round the World,” Schoolhouse Rock! Rocks is the place to do it.

That is, if you can find the album. Is Schoolhouse Rock! Rocks interesting as an oddity in the world of music? You bet, but it also stands alone on its musical merits, as well.

(Oh, and if you are curious as to who got to do “I’m Just a Bill,” it was done by The Folk Implosion, a Lou Barlow project which is credited as Deluxx Folk Implosion here.)