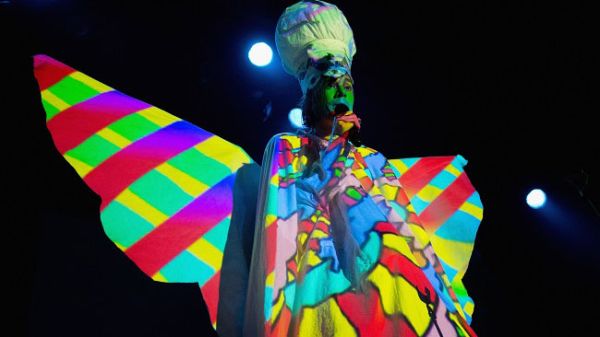 We would never advocate using a drug that’s still completely illegal to use recreationally in the majority of states (except, you know, here and here and here…). However, there are certain situations — especially in the music world — where being a little altered goes a long way.

Most live music is attempting to be transportive, to take you down the tram line into a different headspace than where you started. In grimy clubs and open fields especially, artists are anxious to move themselves and the audience somewhere a bit more interesting.

Not all artists are created equal with regards to how far they’re willing to travel. Some just want you to feel an elevated sense of reality, while others want you to peek into an acid-tinged dimension full of frightful creatures and neon art. This is mostly a list about the latter, though all of these artists can be helped along by an audience-wide pregame of dubious legality.

This rock n’ roll collective fronted by glam shaman Kevin Barnes is forever in flux. No one who heard their Beach Boys-indebted strumming and harmonies on 1997’s Cherry Peel could imagine the synth-driven crossdressing freakouts of Hissing Fauna, Are You The Destroyer? or the garage-rock sound of lousy with sylvainbriar.

Their stage show reflects this sense of constant shift with spinning psychedelic artwork, skits involving boxing presidents, demons, poodle-headed people with three sets of breasts hidden under their robes. The first Of Montreal show I ever saw involved a fake sacrifice and they have only gotten weirder as time goes on.

Seeing a bunch of oddballs stand behind their gear and belt out odd, layered snippets that could soundtrack a pro-LSD PSA could very well be boring. After all, they’re just standing there. But Animal Collective put the same amount of effort into an interesting stage show as they do wrestling uncomfortable and unexpected sounds out of their equipment.

AnCo often stand on stages that look like a Monty Python nightmare, with giant heads or teeth looming up from behind them as their light show turns everything else into a swirling mass of color.

One of these things is not like the others.

Trippy shows lose their effectiveness if that’s all you ever see. Go for a different, more mellow experience every once in a while. (If you need new strains, we have suggestions).

Real Estate’s show is fairly straightforward, but their sound is like @ChillSitch tweets brought to life. It’s the perfect music for trying out that hippie festival dance that makes everyone look like human mops.

Consider this one a bridge between Real Estate and the other acts on this list. Kaki King’s blistering, jazz-fueled guitar-playing and interesting visuals make for a more heady and subdued experience than tripping in a field at [insert hip new festival #2453], but her stage show is still a sight to behold.

Kaki uses her guitar as a controller in her new show The Neck Is A Bridge To The Body, triggering lights and other visuals with the notes that she plays.

You’ve never truly gotten weird until you’re forced to confront oddness up close. The packed and sweaty carnivals that are Quintron & Miss Pussycat shows are the perfect place to stare into the odd abyss and hope that it stares back at you.

This New Orleans institution is one part swamp-funk, one-part strange instrument showcase, one-part puppet show but 100 percent strange as all hell. If the stage show somehow isn’t enough, the words to “Swamp Buggy Badass” are super easy to remember and shout along to.

Of course, there is a near infinite number of weirdos out there willing to let the world know what the inside of their head looks like. We’ve barely scratched the surface on this subject, so feel free to add your suggestions below.