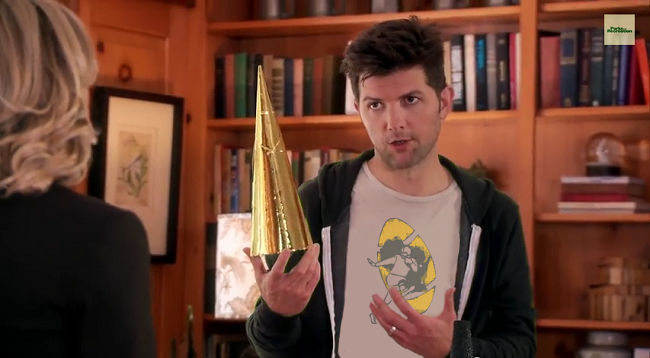 There’s very little to do in Green Bay, what with it being the smallest NFL town in the country too cold to go outside most of the time. According to The Wall Street Journal, Packers players filled up their down time this season playing “Settlers of Catan,” a strategy-based board game most non-gamers will recognize as the inspiration for Ben Wyatt‘s “Cones of Dunshire” on NBC’s Parks and Recreation.

Sadly, they’re going to have a lot of time to brush up on their colony-building skills after their loss to the Seahawks on Sunday.

Starting tackle David Bakhtiari introduced the game to the rest of the locker room about two months ago. It started with just a handful of players taking part, but after increased interest and escalating competition, Bakhtiari had to buy the board expansion so they could have six player games. They take the game very seriously, even barring music from being played during Catan Game Nights.

“I was just trying to play some music—some Pearl Jam, and [Bakhtiari] wouldn’t let me. He wanted to hear the players talk and strategize. He was very serious,” [backup quarterback Matt] Flynn said. “They take it to a different level.”

Apparently during one such serious game, Bakhtiari left the room to cook dinner for the guys, and center Corey Linsley won the game. Bakhtiari protested the win and put an asterisk next to Linsley’s name. The game’s popularity among players was mentioned in passing on a radio show, and local stores that stock Catan soon sold out of it. Pat Fuge, owner of Gnome’s Games, had to re-order his usual Christmas stock in mid-December.

“When the average person sees the Packers doing it, it becomes a safe thing. That it’s not the kids in mom’s basement anymore,” Fuge said.

I’m glad that the Packers are giving a little bit of attention to some of the “geeky” things that haven’t quite hit the mainstream yet. Even the Cones of Dunshire wasn’t popular outside of the CPAs- and Silicon-Valley types. Unfortunately after losing the NFC Championship, I’m afraid fans might think the team should have focused more on football and less on which resources will help them best develop their settlements. In fact, there are already angry comments on the Wall Street Journal’s original story.

The far more superstitious could blame Linsley, who accidentally spilled water all over the board last Monday night.

“It went all over the board, it dried out the cards,” [tight end Justin] Perillo said. “He has to buy Bakhtiari a new game.”

(I realize I may be committing a Parks and Rec fan sin by Photoshopping out Letters to Cleo. I accept this.)