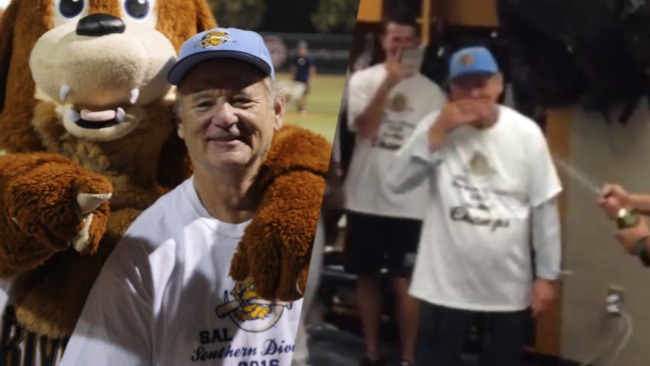 If there’s one thing that grumpy old man Bill Murray isn’t shy about loving, it’s baseball. The actor and comedian is a co-owner of the Charleston RiverDogs, Single-A affiliate of the New York Yankees. In addition to his ownership stake, Murray also holds the title of “Director of Fun,” which is probably the most joyous position anyone could aspire to hold.

Murray did his part to fulfill his duties on Tuesday night when the RiverDogs clinched the first-half division title and earned a spot in the South Atlantic League playoffs. It was the team’s first postseason berth in over a decade, and the Director of Fun made sure they celebrated appropriately. Obviously, that wouldn’t be possible without champagne.

As the moved the party to the clubhouse, even more champagne was broken out and Murray became a central part of the celebration. The champagne tasted like victory and he seemed to enjoy himself.

If this is the kind of celebration we get to see following a division title, I think we all have no choice but to root for the RiverDogs to take home the first-half championship just for the sake of what the Director of Fun would have in store afterward. Plus, Murray deserves it after what Xavier put him through earlier this year.