Sandra Bullock further cemented her place in Hollywood’s elite with 2009’s The Blindside, which was released six years ago today, a heartwarming and true sports film about underprivileged football player Michael Oher. After an impoverished childhood with a junkie mother, Oher was adopted by the wealthy Tuohy family. Using their vast resources, Leigh Anne and Sean helped to transform Oher into a first-round draft pick. He currently plays for the Carolina Panthers.

Sporting a blonde ‘do, Bullock’s no-nonsense portrayal of the real-life Tennessean led the movie (based on aspects of Michael Lewis’ book about the transformation of the offensive tackle position) to box office success and a place on family DVD shelves everywhere. With a cast of Hollywood greats and even music superstars, it’s no surprise the most of the onscreen Tuohy family and friends are still doing well.

Here’s what they’re up to now.

The 31-year-old got his big break in the 2009 film, although the year before, he had a bit part in Jack Black’s Be Kind Rewind. It was Blind Side, though, that served as a sufficient launching pad for Aaron’s career in Hollywood. Immediately following the film, he booked an episode of Law and Order: SVU, and then a two-episode recurring arc in One Tree Hill.

Aaron then joined the incomparable Nic Cage in the 2014 action thriller Left Behind and has a plethora of films in production including several religious pictures. Highlights include a sexy thriller with Evan Ross (the spawn of Diana Ross) called Broken Doll, and an drama with Alan Thicke: It’s Not My Fault and I Don’t Care Anyway. He’s pulling double duty for 2016’s Halfway, executive producing and starring as a recently released convict.

In 2012, Aaron started The Quentin Aaron Foundation, which encourages parents and youth to speak out against bullying. Aaron travels as part of the foundation, speaking at schools and private events.

He last made headlines more than a year ago after being booted off a U.S. Airways flight due to his size, which he at the time called a wakeup call.

After the role that nabbed her an Oscar (and a Golden Globe, and a SAG Award), Bullock’s only been on an upswing in her capacity as one of America’s sweethearts.

Although the year marked the beginning of the end for Bullock and then-husband Jesse James’ relationship, she soon after adopted son Louis as a single parent.

She’s shown her comedy chops in movies like The Heat, and dramatic efforts in Gravity – a performance which was recognized across the awards circuit. Most recently, she coerced George Clooney out of his role in Our Brand Is Crisis so she could have it for herself.

Bullock was named The Most Beautiful Woman by People in 2015, has kept her spot on Forbes‘ Highest-Paid Actresses List (she was No. 1 with $51 million last year) and has recently become outspoken about sexism in Hollywood. She’s currently nabbing headlines for a hot new romance.

While Tim McGraw sometimes dabbles in film, he’s mostly returned to his career as one of country music’s greats. He was in Gwyn Paltrow’s Country Strong in 2010, and Tomorrowland last year, but McGraw’s on-screen credits are otherwise now few and far between.

After a dramatic label switch, McGraw joined Big Machine Records in 2012, and released Two Lanes of Freedom the next year. His eighth “greatest hits” album was put out in 2014, and, just this month, he released Damn Country Music, his FOURTEENTH studio album.

He has a few concert dates lined up for spring 2016, but no official tour has been announced. He’s currently on the late night and morning show circuit promoting his singles. Just last week, he performed on The Tonight Show.

Little S.J. is now an 18-year-old high schooler. Child stars, they grow up too fast.

He’s mostly focused on being a real kid since the role, however, save for providing his voice to a 2013 kid’s robot movie and, this year, appearing alongside Josh Duhamel and Laura Dern in Bravetown. The flick has a tagline “Life hurts. Love heals.” So…

His Instagram and Twitter accounts show a peek inside an average teen’s life, complete with prom and braces.

Collins is doing a little better than her famous father, Phil Collins, these days. The 26-year-old starred as Snow White in Disney’s Mirror Mirror before finding her way into a few rom-coms and a young adult novel adaption – The Mortal Instruments: City of Bones. She even found romance on the set, and has since been in an on-again-off-again relationship with co-star Jamie Campbell Bower.

She’s starring next in a yet-to-be titled Howard Hughes flick directed by Warren Beatty and due out next year. The movie, which is about the pioneer’s later years, stars a bevy of big-namers like Matthew Broderick, Alec Baldwin, Annette Bening and Martin Sheen.

In less important news, the star almost single-handedly started a women’s beauty movement with her bushy brows. No word yet on whether she supports that aforementioned Phil Collins comeback, however.

Kathy Bates is still a prominent star at 67. After appearing as tutor Miss Sue, Bates popped up as the Gertrude Stein in Woody Allen’s Midnight in Paris, nabbed a long arc on The Office, and even had her own comedy-slash-law sitcom, Harry’s Law, for two seasons on NBC.

Her true television piece-de-resistance, however, has been her chameleon-like roles on the past three seasons of American Horror Story. The actress has an ability to embody each creepy and kooky part Ryan Murphy throws at her. On the current Hotel, Bates is overprotective mom and hotel employee Iris.

Bates has several films in the pipeline, and it was just announced she’ll join Bad Santa 2 as Billy Bob Thornton’s foulmouthed mama.

She’s also using her own personal health struggle for good in the public eye. The actress suffers from lymphedema, the buildup of fluid in soft tissues. She now serves as an ambassador for the Lymphatic Education & Research Network, and helps bring awareness to the condition, which can cause immobilizing swelling in the arms and legs.

When the 59-year-old played Michael’s biological mother in The Blind Side, she had already tasted sweet victory. In 2005, she nabbed a Tony for Broadway’s Doubt. In the stage production of the 2008 movie, Lenox played the role of Donald’s mother, a part taken on by Viola Davis for the flick.

Aside from her stage work – which recently included a stint in 2013’s After Midnight – Lenox had a recurring role on 30 Rock as Jack’s daughter’s night nurse and an arc on Damages.

Her big screen roles include Gina in Lee Daniels’ The Butler and a part in The Skeleton Twins. She currently stars as the Deputy Attorney General on The Blacklist and Doris Urich on Netflix’s Daredevil.

McKinnon, now 58, wears many hats, one no longer being actor. While his lengthy Hollywood career has guaranteed him “that guy” status for life – he’s been in Justified, Mud, Sons of Anarchy and even 2011’s Footloose – McKinnon left it all for a life behind the camera.

The star is the creator, writer and showrunner of the greatly under-appreciated Rectify. The Georgia native’s SundanceTV series follows Daniel, a man freed from death row after 19 years of imprisonment for rape and murder. So, how did McKinnon make the jump from cast to crew?

“I was just really curious about this story, and it had been in my head and belly for some time, and I just wanted to see if I could write the initial episode,” he told The Hollywood Reporter. “Everything that has happened beyond that is surreal. The first time that the initial offer [a six episode first season] was made, I couldn’t quite grasp the ramifications of that. You know, I guess I’m still shocked that I’m doing what’s called a television show.”

Dickens went from playing a teacher in The Blind Side to playing another in Fear the Walking Dead. In between, she played a brothel owner on Sons of Anarchy, a detective in Gone Girl, Matt Saracen’s mom in Friday Night Lights, and a chef in Treme. In 2016, Dickens will star in the adaptation of, Miss Peregrine’s Home for Peculiar Children. 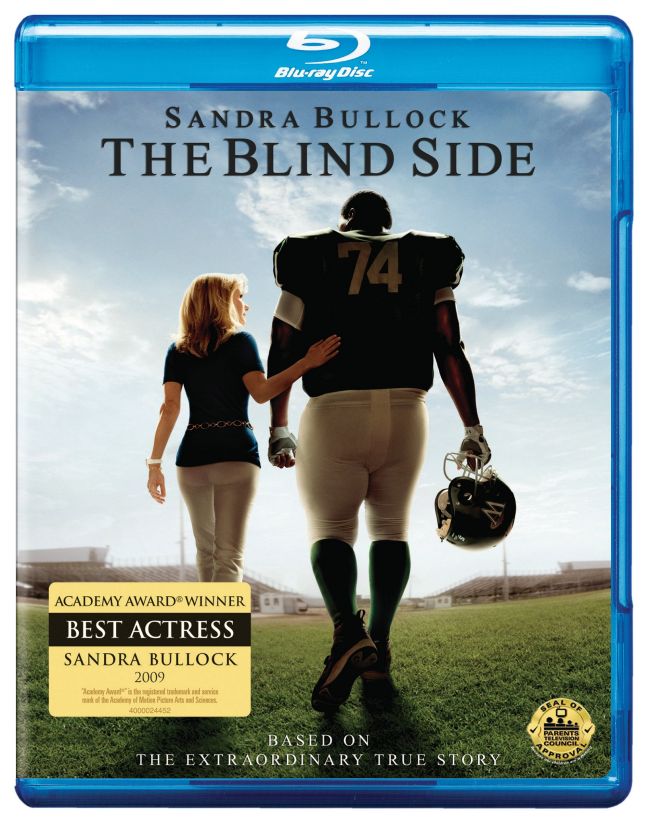 Hope you enjoyed our look back at The Blind Side. Our friends at Warner Bros. asked us to remind readers that The Blind Side Blu-ray is available for purchase on Digital HD.