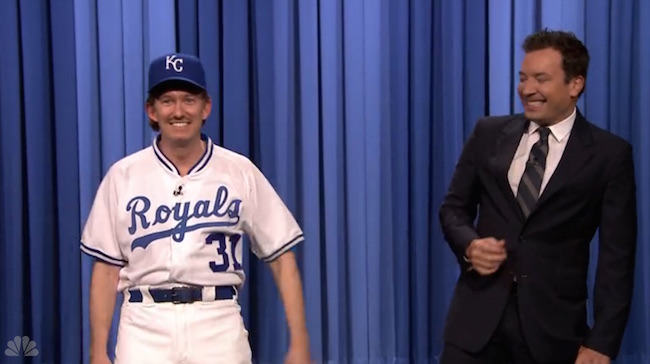 Have you ever had a memory from your childhood that no one else remembers, to the point you start questioning if this memory ever happened? This, for me, had been a local Kansas City Ford commercial from 1986 featuring Royals pitcher Bret Saberhagen rapping about trucks.

In 1986, my father often took business trips to Kansas City (so often that two years later, we’d just move there). On one of these trips, he took me with him and, while hanging out in the hotel room, I watched a lot of television. And that’s when I met rapping Bret Saberhagen.

At the time, we lived in Springfield, Missouri, which was mostly St. Louis Cardinals territory. Seeing any sort of local commercial that featured a sports personality not wearing the Cardinals’ birds-on-the-bat logo was unusual enough for me, let alone one in which Bret Saberhagen was rapping.

Coming off a 20-win season in 1985 that culminated in a World Series MVP award (an achievement that involved defeating my beloved Cardinals, something that really stung at the time), Saberhagen was having a pretty dismal 1986. But, there he was, rapping — as far as I could tell, he was rubbing it all in my face. I had come to Kansas City for the first time in my life, and Bret Saberhagen was taunting me by rapping about his World Series MVP award and Ford trucks. Then he ended it all with something he called “The Saberhagen Shuffle.”

Since then, any time someone says “MVP” (which is a lot), my mind instinctively thinks, in its best Bret Saberhagen rapping voice, “the special edition Ford MVP.” I stopped saying this out loud because people would ask what this meant and no one had any idea what I was talking about. Most surprisingly, even people from Kansas City had no recollection of this commercial. I started to think I had maybe hallucinated the whole thing. Finding this commercial became my search for the Holy Grail.

With the Royals in the World Series, this commercial was on my mind again. I did an exhaustive search of YouTube again, using multiple search terms trying to find it. Then, deep within a YouTube clip of multiple Kansas City-based commercials from 1986, there it was. (Actually, it’s featured in this loop twice, the first at 9:25, along with Bryan Cranston selling Preparation H at 28:33.)

Ever have a memory from your childhood completely be validated as being just as bizarre and wonderful as you had imagined? This is how I felt watching Bret Saberhagen rap again, 29 years later. On Tuesday, I tweeted it out, to little fanfare. But, we ran a quick thing about it and Gavin Purcell, a producer at The Tonight Show Starring Jimmy Fallon that I’m friendly with on Twitter, noticed. And, on Wednesday evening, he told me that I probably wanted to watch Fallon that night. I did. And this happened.

The shock hasn’t worn off, so I am being purposefully hyperbolic; but this is one of the most wonderful things I’ve ever seen. First, there’s the full clip of Saberhagen rapping on The Tonight Show 29 years after I first saw it. Then there’s Fallon head writer A.D. Miles as “1986 Bret Saberhagen,” doing some more raps and ending it with “The Saberhagen Shuffle.” Which, as Fallon notes, is pretty much just Bret Saberhagen walking.

I have no idea if anyone else on the entire planet thinks this is funny except for me. This is basically a comedy sketch written exclusively for something I find hilarious that’s been building up inside of me for 29 years.

Last night, I tweeted at the real Bret Saberhagen that this sketch had “made my night.” He favorited it, but I do wonder what he’s thinking. Why, 29 years after making a goofy commercial that literally everyone had forgot about (except, apparently, one person), it was now comedy fodder on one of the most popular shows on television. I wonder if it’s like thinking you got away with a bank robbery, then 29 years later, the police all of a sudden swarm your house. Like, “What, why now?”