Why Is J.J. Watt Body-Shaming A College Kid In A Gatorade Ad?

J.J. Watt is rapidly approaching overexposure in the offseason, with his unrelenting Man’s Man brand of Male Masculinity and Grit. Apparently he’s no longer satisfied with making less muscly people feel inadequate via the Internet, because he’s teamed with Gatorade to make random dudes feel bad for drinking Gatorade without EARNING IT with GRIT and SWEAT and MORE MUSCLES THAN YOU’VE GOT, SHRIMPY.

Maybe it’s because Gatorade isn’t legally allowed to claim any health benefits from its day-glo sugar water unless you’re burning enough calories for it not to matter what you dump in your body, but it still seems like a step too far to send J.J. Watt to literally tip over a machine — filled with their products! — rather than let some random dude (who raises his own questions, which we’ll get to) just have his damn Gatorade without having crushed some hardcore reps in the gym, bro. J.J. approaches this task with the same sense of joy and enthusiasm with which he plays football, which is to say that he treats it like he’s a military sniper on his fourth tour of duty. Nothing can even crack the façade anymore.

Now, about that college kid. I feel bad for him, because he literally gets body-shamed by Watt, who looks at his choice of shirt, says, “Muscle shirts are for muscles,” flexes and walks away. Who does that to a person? That bro does not get paid millions of dollars to spent 90 percent of his time working out! But something bothers me about him, and this whole situation for that matter: 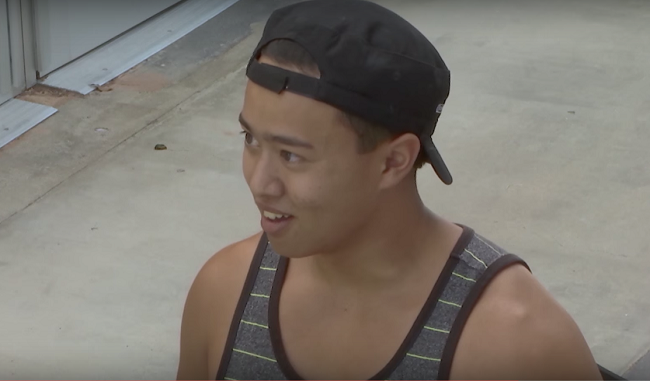 It’s a pretty funny commercial, if only because it seems like Gatorade is now trying to make PSA’s warning against drinking Gatorade unless you’re pouring sweat and at such a caloric deficit that even dyed high fructose corn syrup mixed with salt is better than nothing. You gotta respect Gatorade’s commitment to the truth.