A Delaware court found that Sprint Cup driver Kurt Busch has committed an act of domestic violence against his girlfriend, Pamela Driscoll. Driscoll took out an order of protection against Busch earlier in the week, after stating that Busch allegedly smashed her head into the wall of his motor home.

“The Court finds by a preponderance of the evidence that, on September 26, 2014, Respondent [Busch] committed an act of domestic violence against Petitioner [Driscoll] by manually strangling her by placing his left hand on her throat, while placing his right hand on her chin and face and smashing her head into the wall of his motor home,” commissioner David Jones wrote in his findings and conclusions.” – Commisioner David Jones

Shortly after the news broke, issued the following statement:

Chevrolet followed suit by also suspending him indefinitely. Prior to the suspensions, Busch was set to race in this Sunday’s Daytona 500 race. As word spread further throughout the NASCAR community, it was discovered that Busch’s #41 garage stall at Daytona had been vandalized: 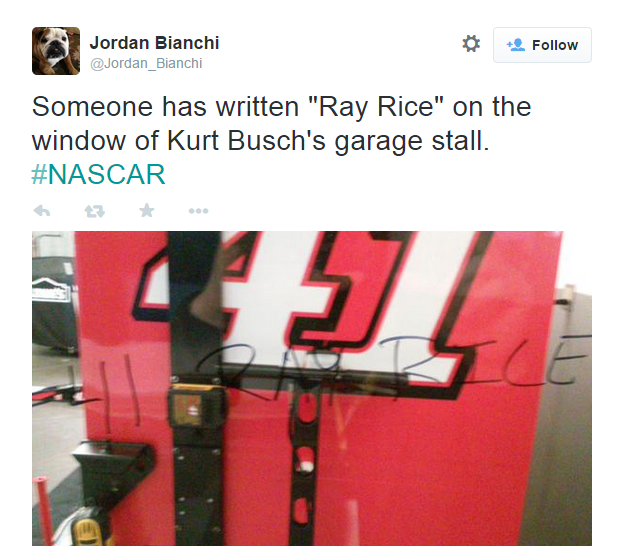 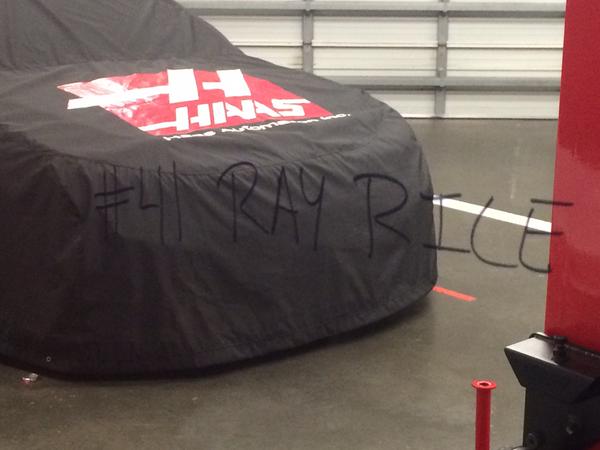 Kurt Busch is “to be evaluated by a licensed mental health professional” according to Jones, and then move forward with any recommended treatments. At this time he is not required to enter a batterer’s intervention program as they believe the alleged assault was a situational incident. During family court proceedings he said that he is afraid of Driscoll, and believes – based on photos and stories she showed him – that she is a trained assassin. Busch is currently seeking to have the protection order lifted, making the argument that Driscoll is a spurned lover trying to ruin his career and reputation.

All of this has happened after the preponderance of evidence for family court, meaning no official charges have been filed. With the way this story has been moving, we may hear that news sooner than later.