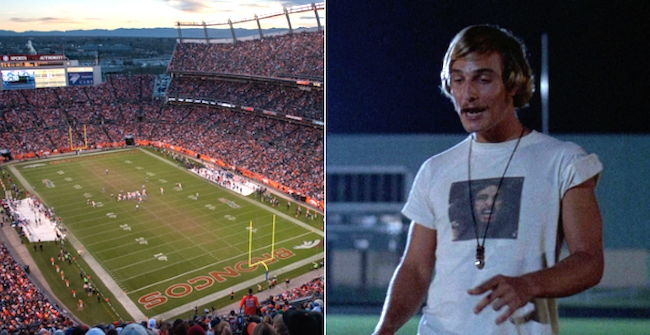 Is the world ready for a marijuana dispensary to hold naming rights of an NFL stadium? Well, if it is, there seems no better place to start than the one affectionately known as Mile High.

The Denver Broncos’ stadium is currently dubbed Sports Authority Field at Mile High but, in case you missed it, the sporting goods store was forced to do this recently:

With the company’s bankruptcy filing, many are wondering whether they’ll be able to hold onto the naming rights for the defending Super Bowl champs’ home field. If not, one of Colorado’s biggest dispensaries wants to take over.

The company says it has begun the process of acquiring the naming rights. However, since the contract still belongs to Sports Authority, Native Roots says for now that process has consisted of internal meetings.

If everything were to go as planned and the naming rights approved, its founder says the stadium will be called Native Roots Field at Mile High.

“Native Roots was born and raised in Colorado and we are the natural candidate for this. I don’t see cannabis going anywhere but up right now so we are prepared for that.”

The obvious question to be answered here is whether or not the league would be cool with a team being so closely associated with marijuana, and if the team would even want that itself. Although weed is legal (to an extent) in Colorado and many former football players are using marijuana as a medical treatment to deal with their post-career issues, one would assume there’d be a certain amount of pushback on this idea from the public and/or suits involved with the Broncos and NFL.

With that being said, it’s something to keep an eye on. You know what they say…sometimes when there’s smoke, there’s fire. Plus, my money’s on the concession sales going THROUGH THE ROOF.

This Broncos fan has a jersey, with the number 420 on it ?? #DENvsKC #SNF pic.twitter.com/GRn1QvKSUd