College refs are not having a very good time. They were under fire all year, and the NCAA Tournament, which is typically reserved for great performances and the creation of Cinderellas, only served as a gigantic showcase for just how out of their element the NCAA’s officiating crews really are. This isn’t a simple “you hate my team” or “they get all the calls” situation. There was a pattern of consistently bad officiating that not even the broadcasters or analysts could ignore.

This is one of college basketball’s many problems right now. The game isn’t broken, but it needs help, and continuing to neglect the issues hoping a dose of march madness will solve all the ills is only serving to hurt the sport moving forward.

What’s certain is that change is needed, and the sport’s leaders are saying all the right things about serious discussion of significant change coming. It’s naïve to think that college basketball’s regular season will ever approach the popularity of the NCAA tournament. But it’s even more naïve to think that the game doesn’t need an overhaul to prevent it from being cemented as a one-month sport. And now that the off-season is here, the magic is gone and the game’s problems will continue to persist.

It was officiating, though, that seemed to persist the most following what should have been a great national championship game on Monday. There were incredible performances and unlikely heroes, and yet, what got talked about the most? Botched calls. Both Mike Krzyzewski (at halftime) and Bo Ryan (after the game) took shots at the officials, and Twitter was ablaze with everything the refs were getting wrong throughout the game. 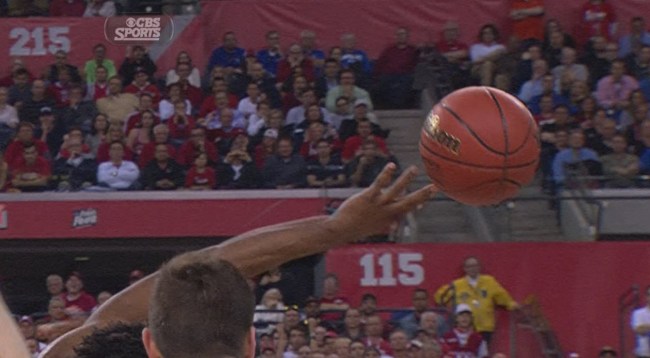 The most egregious offender was the out of bounds call with around two minutes to play. There was a fight for the ball, and it certainly looked like it went off Justise Winslow’s fingertips. The ball was initially awarded to Duke, and the refs went to the replay. Every single TV angle showed clearly, without a shadow of a doubt, that Winslow touched it last. Bill Raftery mentioned something about Winslow needing a “mani” while the replays were going on. And yet, the refs still gave the ball to Duke.

NCAA head of officials John Adams took to SiriusXM College Sports on Tuesday to try and explain the call and did little to alleviate anyone’s concerns.

“All four of our officials were involved in the review — Jeff Clark was our standby,” Adams said. “We never saw on our monitor what everybody saw at home, if you can believe that.”

“I saw it after they had left the monitor, and actually thought about: Is it in my prerogative to get up, run over the table, buzz the buzzer and tell them to come back and look?” Adams said. “That’s how critical I thought the play was, and concluded that this is a job for the guys on the floor and I’ve never done this before, why would I do it tonight and perhaps change the balance of the game?”

“We had been told time and time again, ‘Nobody at home will see anything you didn’t see.’ And I will tell you that’s not what happened last night. That is not an excuse. That is just laying it out for you.”

Well that certainly clears it up. The refs didn’t have the angle everyone else in the world had in order to make the correct call during the most important game of the college basketball season. Doesn’t everyone feel better now?