Meat Pies And Pubs: Experiencing The Insanity Of A Premier League Match

The first thing you notice is the chanting.

Not the unintelligible murmur of a large crowd, the steadily rising banter of a concert hall before the first note, but the chanting. Clear, loud, surprisingly clever lyrical chanting. Like if J-E-T-S JETS JETS JETS were sung by dudes who know how to make “Que Sera, Sera” into a really insulting song.

Even more amazing is that it’s the road fans making all this noise at this Premier League match, one cordoned off section of the stadium filled with Watford F.C. supporters who are intent on making themselves louder than all the hometown Arsenal fans despite the long odds of their team.

Watford entered the game in 12th place with nothing much left to play for in a league that doesn’t have a playoff system. Safe from the danger of relegation (when the bottom three teams in the league are dropped to the lower division each year), but nowhere near a top-10 finish. Arsenal had an outside shot at the league title, but now they’re just playing to keep their top-four spot and ensure Champions League play again next season. There’s a big difference between fourth in the league and 12th, as will be reflected with a 4-0 Arsenal victory at the end of the game today, but not if you could hear the fans. To hear it in person is to think it’s going to be an even game.

I found myself here after 22 years of caring about soccer, although at largely different levels of affection. In 1994, I was an All-American kid who cared about baseball and football, but then the World Cup came to the U.S. and I got hooked. (It didn’t help that later that summer baseball went on strike, and the attention span of a child is fickle and easily distracted.) I started playing, and by high school, the advent of Fox Soccer Channel made it possible to watch league games, not just major U.S. ones, in homes.

In college, I spent Saturday mornings tailgating with a game on in the background, and when the 2006 World Cup rolled around, I rented a big screen TV from my local Rent-A-Center for one month just to soak it all in. I even went to Brazil in 2014 for a few games, but it took me 22 years to finally make it to the home of soccer and experience firsthand what makes the Premier League the biggest sports league in the world. 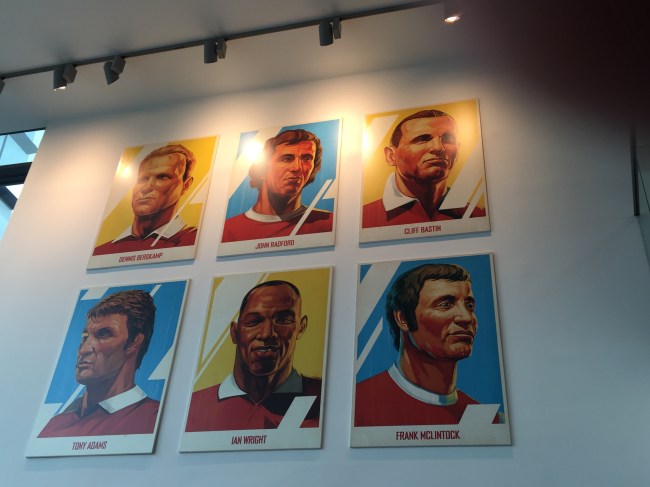 Compared to a U.S. sporting event, it’s not necessarily better, but just different. One neat feature is the ability to gamble on the game you’re about to see, along with all of the other day’s matches. All stadiums offer some form of betting booth, where you can bet on the outcome, who’s going to score first or last, or the exact scoreline. Unlike the NCAA, which supposedly frowns upon gambling while being fully aware that “bracket contests” are being run by every office in America, England embraces the fact that people will gamble and makes it safe and easy to do so. They won’t make it easy to pay out, however, as the stadium betting booth usually closes before the game is over. You’re encouraged to come back next week to cash out, of course, and well hello, sir, with all your winnings, wouldn’t you like to place another bet on this week’s match? 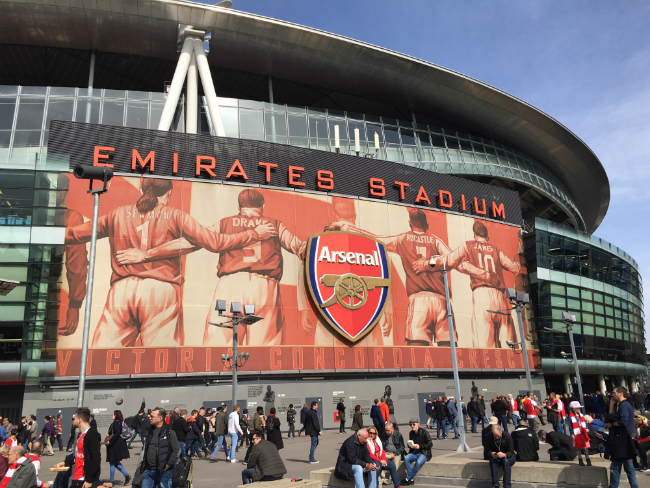 Another is the attention paid to the game. It helps that it’s two halves of 45 minutes each with no breaks in play, but damn is it something these days to see people pay attention to one thing at a time. While U.S. sports range from the languid (lounging at a baseball game and half paying attention) to the hyper-focused for seconds at a time (live hockey), a soccer game demands you to constantly watch if you hope to be able to anticipate where the play is going. There are no stoppages except for a goal or an injury, leaving you little time to look at your phone. But you can also watch it in a relaxed fashion, rising from your seat only when you can see that one team is, if they can only see it, just two or three passes away from a goal. The tension rises, people stand, and whether there’s a goal or not, everyone’s going to have to exclaim something. You haven’t heard expletives until you’ve heard them yelled by an Englishman.

You’ll find no outrageous stadium food here. If you’re looking for a two-foot hot dog or a burger the size of your head, you’re in the wrong place. Instead you’ll find meat pies. Pies full of meat! Like little mini-quiches, these are miniature pot pies filled with gravy, meat and veggies and a nice flaky crust. It’s a little more difficult to eat than a brat or a burger (which yes, they have as well), but it is delicious and filling on a cold, gray London day. 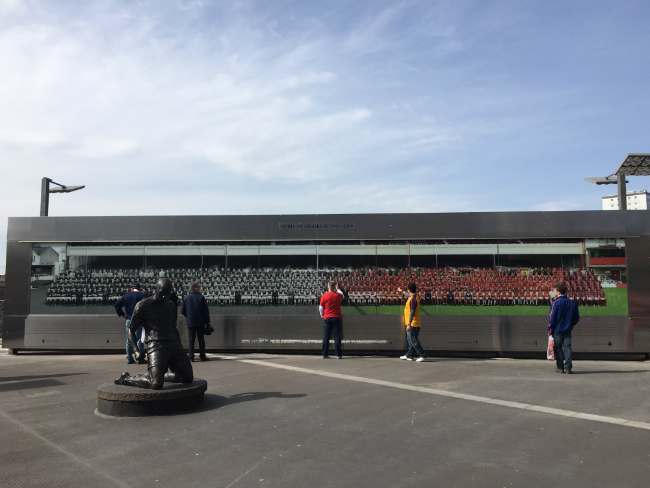 But if you really want to have a cheap day at the park, you can do that, too. Unlike American stadiums which use the excuse of terrorism and capitalism to restrict everything you can bring in, forcing you to pay obscene amounts at the concession stand, you can bring “food within reason” and soda inside in your own bag. While I imagine stuffing a whole pig into a messenger bag might not pass as reasonable, fans often bring in their own chips, popcorn or snacks along with some soda or water. Small bags and backpacks are still allowed, too, after a brief search — no need for a clear plastic NFL-licensed tote bag like some overbearing leagues we know.

Before the game, I met up with a friend of a friend, who took me into one of the neighboring pubs. The Tollington, a local bar, is one of many I passed that had signs prohibiting entry to anyone but Arsenal fans before the game. When I arrived, they even asked to see my ticket. But once inside, it was clear that to these folks, meeting up at the bar before the game is just like American tailgating. You park in the same spot, week after week, year after year, and you get to know the folks around you. Before long, they’re family, and this is church. 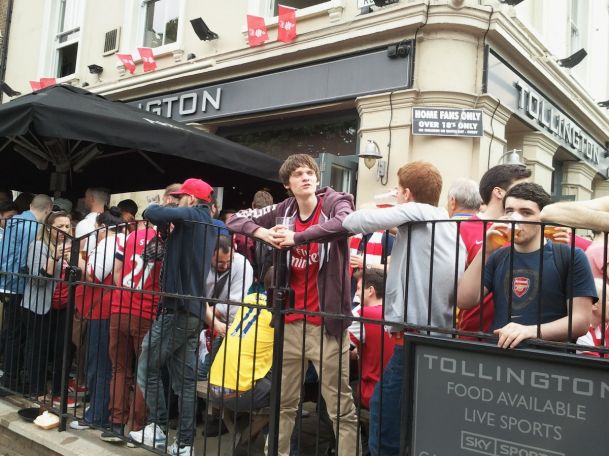 It’s easy to assume that most Arsenal fans are just bandwagoners hopping on a competitive team, but that’s not the case in the neighborhood around the stadium. I imagine it’s not the case in any of the neighborhoods in England that surround Man U, Chelsea or Liverpool, either. If you grew up in the neighborhood, you cheer for this team alongside everyone else. You feel maybe just a little bit closer, in fact, to a team like Arsenal or Chelsea, because they’re all contained within the same city. It’s easy to be a Chiefs fan when the entire state of Kansas agrees with you. But it feels a little more sincere when you know there are four or five other Premier League teams with legions of fans just a few blocks away. Your tribe must stay closer, and more compact, and in that closeness breeds affection.

Arsenal won’t win the league this year, but that’s okay. To hear it from fans at The Tollington, they’re proud of fielding a competitive club that plays an attractive, attacking game. They’re also proud of the Emirates, a stadium that was paid for entirely by the club through various sponsors and bank-financed debt — but not taxpayers. The stadium is 10 years old this year, but you’d never know it to look at it or walk around its merchandise store. It’s certainly no Jerry World, but at 60,000 seats, it’s not trying to be. All it wants to be is a packed house on Saturday afternoons, large enough to represent a championship caliber club, but small enough to echo the songs of their fans. To them, it’s home.