UR Fight had plenty of hype as a freak-show event featuring MMA, boxing, pro wrestling and grappling. Maybe too much hype. But, somehow the odd little show delivered on all potential goofiness, featuring Rampage Jackson, Sean Wheelock and Jim Ross as a great crew of commentators that gave in to the freakiness and went along for the ride.

—Roy Jones Jr. def. Vyron Philips via TKO (round 2). Jones clearly outmatched Philips, who had next to no notice (and training). You can see the knockout here.

—Rey Mysterio def. Kurt Angle in a best 2/3 falls match. Both men have seen better days, but what the hell — it was silly and fun. Rampage Jackson absolutely LOVED the match, going wild during the big spots.

With falls tied 1-1 and Kurt Angle about to work over Mysterio with a steel chair, Riff Raff ran out to the ring, Rampage shouted “motherf*cker” and all hell broke loose before Mysterio got the third pinfall. It was perhaps the most entertaining thing I’ve seen since Mark Hunt knocked out Frank Mir.

Here’s some of the weird, impromptu Riff Raff show that featured Riff Raff in a salmon suit, flanked by scantily clad women and a single security guard that wasn’t doing his job well if he was wearing sunglasses in a dark arena. How could he see any threats? 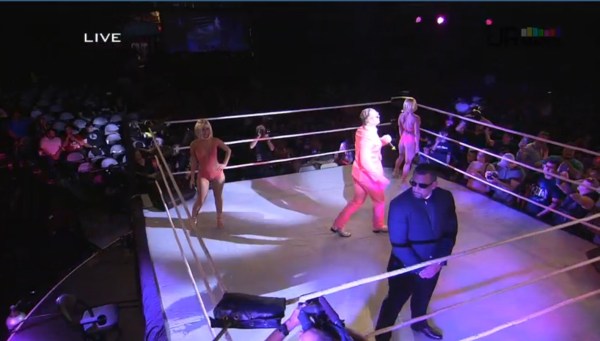 —Michael Bisping and Chael Sonnen grappled to a draw over three, 5-minute rounds that featured Rampage Jackson mocking Bisping mercilessly for almost 20 minutes straight. Rampage pretty much said Bisping was smelly and that he generally just hated him because he was a dirty fighter.

Chael Sonnen vs Michael Bisping #URFight @bisping does a Q&A during his match pic.twitter.com/7zKb3kt82M

It was already a strange matchup with Sonnen weighing in at over 230 pounds and weighing more than 19 pounds more than Bisping. Both men didn’t do much, and it led to commentator Sean Wheelock dissing the the lack of action on a hot mic. #TeamChaos #URFight

The big takeaway from Sonnen/Bisping: Chael Sonnen confirming that we won’t be seeing him come back to the UFC when his suspension is up later this year.

But honestly, who knows? Why would he announce his comeback on UR Fight?

— Shannon Ritch def. Mavrick Harvey via rear naked choke (round 1). The fight featured two dudes fighting between the ropes almost as much as they did in the ring, and a wedgie that you can watch here. Yes, a wedgie. This weird opening fight took the spot of the Dan Severn vs Ken Shamrock bout which morphed into Dan Severn vs Tank Abbott which then morphed into nothingness.