What The Hell Is On truTV When March Madness Isn’t On? An Investigation. 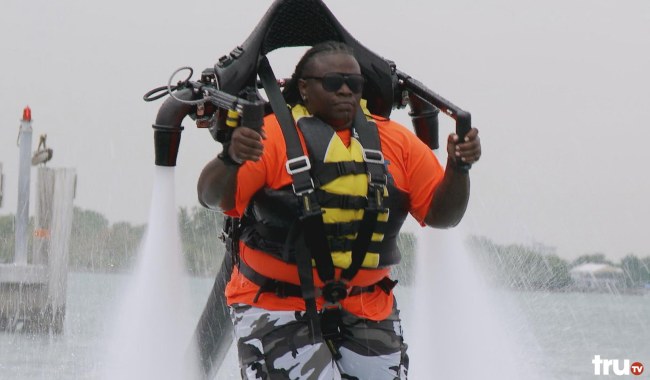 To its credit, truTV has been having a little fun with the situation, kicking off a “Have you found truTV?” campaign online to help viewers locate their channel. But while that answers the “where” of truTV, it doesn’t help us very much with the equally pressing question: “What in the world is truTV anyway?” Let’s investigate.

As recently as 2007, truTV was known as Court TV, and its schedule was filled with legal reality shows and coverage of notable ongoing trials. A format and name change the following year brought with it a bunch of new reality shows, some investigation-based and some having nothing to do with law enforcement. That lasted until October 2014, when the network underwent another “rebranding.” From Wikipedia:

The network’s new focus on humor, while still retaining a reality format, is to attract any “funseekers”. The logo was tweaked only slightly by elevating the circle/punctuation mark and italicizing the “TV”. In addition to being marketed as “The New truTV”, the network rolled out a new tagline: “Way More Fun”. All this is intended to shed any of the lingering severity associated with the network’s previous Court TV roots. “People who are not familiar think it should be a documentary channel,” says Linn, who admits that building brand awareness in those 93 million homes is a big challenge. “This is about celebrating all of the great things happening in TV right now.”

And how does one “celebrate all of the great things happening in TV right now?” Well, with a few interesting shows, like Hack My Life (a showed hosted by Kevin Pereira from Attack of the Show that focuses on various life hacks), Friends of the People (a sketch comedy series featuring the Lucas brothers), and the always delightful Billy on the Street, which comes to the network later this year. It also apparently means with pawn shops, bad haircuts, and at least two (2) shows about cars getting towed and two (2) prank shows, depending how many more towing and/or prank shows they have picked up since I started typing this sentence. Here’s a quick look at some of their more, uh, interesting, offerings.

South Beach Tow is a program that depicts fictionalized reenactments of cars getting towed and/or repossessed. See the picture at the top of this page, of the very intense woman using a jet pack? That is Bernice. She is on this show. And here is the description of the show’s most recent season, from the truTV website:

The South Beach Tow crew returns to the streets of Miami, where the zaniness is in full force from the start. Bernice and her mom kick off their own food truck business, Kosgrove “encounters” the elusive Swamp Ape, and J-Money gets a side-kick who isn’t even old enough to drive. From rapping mermaids to angry female body builders to a tiny smart car owner that really “flips” out, there is nothing too bizarre for this tow company.

What exactly jet packs, rapping mermaids, and running a food truck have to do with towing cars, I have no clue. All I know is that there’s a section of the website labeled “Why You Should Be Watching SOUTH BEACH TOW,” and it is filled with pictures like the one below. South Beach Tow is a good show.

Lizard Lick Towing, as you can probably figure out from the title, is the other towing show on truTV. Here is the description:

Welcome to the freewheeling, always colorful world of Lizard Lick Towing & Recovery. Set in rural North Carolina, Lizard Lick is owned and operated by Ron Shirley, former college football player and ordained minister, and his wife, Amy, former power lifter and trained MMA fighter. Watch Ron, Amy and the rest of the crew as they dodge brawls and bullets in order to get the goods, stay ahead of the competition and keep their customers satisfied.

Fun fact: Lizard Lick Towing is a spin-off of a different, now-defunct towing show, All Worked Up. truTV really likes shows about towing.

Second fun fact: The official Lizard Lick Towing website features all sorts of clothing and merchandise, including this shirt. For children. That’s a lot of tongue IMO.

These are prank shows. Impractical Jokers is supposedly pretty funny. The cast got a spin-off, too. The Carbonaro Effect appears to be Punk’d but if Ashton Kutcher had no budget and were a magician. This is a picture of the host pulling a puppy out of an envelope. Moving along.

A “musical reality show” that follows the cast and crew of the Baldknobbers Jamboree show in Branson, Mo. How they managed to not put “Baldknobbers” in the title, I’ll never understand.

Finally, Hair-Jacked, a show about jacked-up haircuts. From the website:

In this comedic weekly game show, host Jon Gabrus and his gang of accomplices take over a real, working hair salon and ambush unsuspecting clients with a combo of lively and twisted pop culture games. Contestants compete for up to $10,000, all while getting their hair worked on by stylists. But contestants better be careful because one wrong move and they might get hair jacked, sending them home with the most outrageous haircut of their lives!!!

This seems like pretty low stakes for the male contestants on the show because guys can just buzz off any unfortunate haircut. My dream, however, is that there is or will be an episode of this show that takes place on the day of the high school prom and features three 17-year-old girls competing against each other. It will be chaos. There might even be a murder. If only Court TV was still around to cover the trial.

In conclusion, here is Bernice from South Beach Tow ripping the door off of a car. Have a nice day.