Growing up in a life of wealth and privilege, Lindsay Bluth Fünke bravely carries on, at times willfully oblivious to the fact that her family’s world is coming undone around her on  Arrested Development, and at other times, seemingly indifferent to it. With her non-existent work ethic, sham marriage, hands-off parenting style, and hysterically misguided attempts at charity, Lindsay is a true original. Here are some of her most entitled moments in celebration of the news that more are surely on the way.

After Michael announces the sale of the family’s corporate jet, Lindsay is aghast at yet another blow to their social stature. She also clearly has no idea what being poor entails.

Lindsay gives her daughter, Maeby, some thoughtful advice as to why she shouldn’t be allowed to attend the office Christmas party, for appearance sake.

“I hate the Wetlands. They’re stupid and wet, and there are bugs everywhere, and I think I maced a crane, Michael.”

Trying to prove her generosity by volunteering for an environmental cause, Lindsay quickly realizes she’s not able to contend with the reality of everyday nature.

“Did you enjoy your meal, Mom? You drank it fast enough.”

A seminal example of Lindsay’s volatile relationship with her mother, Lucille. What often starts as cutting remarks often explodes into something beyond anyone’s control.

“So I didn’t even fail, and I don’t see you giving me credit for that.”

Constantly trying to prove herself to Michael, Lindsay desperately wants even her failures to be acknowledged for their effort, if nothing else.

“Michael, it was shoplifting, and I’m white. I think I’m going to be ok.”

Wondering where she’s getting the money for new clothes, rather than admit she had taken a job as a shopgirl, Lindsay tells Michael that she’s simply resorted to shoplifting.

“Well, you know, maybe I would be more attracted to you if you were in better shape. You know, if you were just more muscular and masculine. Does that make me shallow?”

Her marriage to Tobias Fünke is in constant jeopardy. Lindsay attempts an honest conversation in order to bring them closer together, which further reveals her superficial tendencies. Tobias will cope, though. At the very least, that means he doesn’t have to take his denim shorts off.

“If you weren’t all the way on the other side of the room, I’d slap your face.”

Michael, as he often does, bluntly points out his sister’s lack of a work ethic. As usual, her response immediately proves his point.

“There’s a cream with real diamonds in it… I can actually smear diamonds on my face, and it’s only $400 a tub! That’s like, what? A million diamonds for $400? A million f*cking diamonds!” 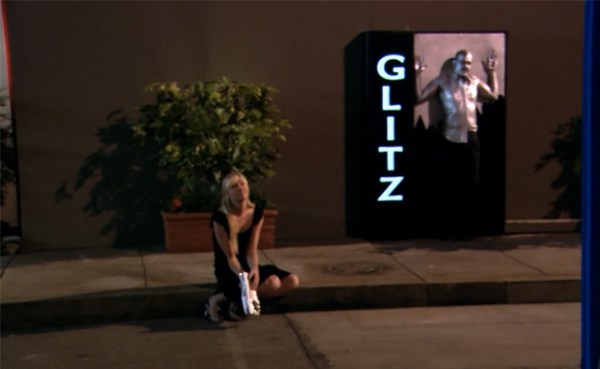 Feeling the need to indulge her expensive tastes on a budget, Lindsay vies for quantity over quality. In terms of diamond cream, that is.

“And they have normal toilets, right?”

Lindsay, ready for her spiritual journey after getting to the “pray” part of “Eat Pray Love,” can’t help but wonder about what she can expect in India.

“It’s all I’ve ever wanted from you, Daddy – for you to spend money on me.”

A touching father/daughter moment that only Arrested Development could provide, Lindsay learns that her cries for attention were met by George Sr., just not the way anyone saw coming.

And, finally, it would be a crime to not include this.