Everything You Need To Know About The Villains In ‘Marvel’s M.O.D.O.K.’ That Are Perhaps Too Weird For The MCU

All it takes is one watch of the Marvel’s M.O.D.O.K. trailer to understand why we aren’t seeing the big-headed villain make his big MCU debut: M.O.D.O.K. is weird, and unfortunately, the MCU historically shies away from embracing “weird” in their villains. Funnily enough though, the trailer barely scratches the surface of how strange the Hulu series is. Sure, the comedy, violence, stop-motion animation, and wacky hi-jinks do a lot of the heavy lifting there, but the series also features several obscure villains many might not have heard of. For those longing to know a bit more about Melter or Fin Fang Foom, we’ve got you covered.

Like most villains, Armadillo was drawn to a life of evil-doing through desperation. Antonio Rodriguez, aka Armadillo, was your average Texas man living a quiet life alongside his wife when she was suddenly stricken with a crippling and unknown disease. After every scientist he turned to proved unable to help them, he turned to a criminal scientist, Dr. Karlin Malus. Malus agreed to cure Rodriguez’ wife if he agreed to be his test subject for an indefinite period of time. Naturally, he agreed, and thus Armadillo was born. In Marvel’s M.O.D.O.K., Armadillo is one of the villains who joins up with M.O.D.O.K. in episode 4. We also see him arguing with his ex-wife, which is actually canon! Turns out that after all that, she still decided not to stick around.

Poundcakes, real named Marian Pouncy, is a former female wrestler and one-fourth of the all-female wrestling team Grapplers. After rising frustrations due to being consistently paid less than her male, wrestling counterparts, Poundcakes the rest of the Grapplers (Letha, Screaming Mimi, and Titania) decided they were done playing nice. The team took up infamous oil company Roxxon on their offer of outfitting them in prize-winning gear if they agree to a life of crime, and thus a small team of villains was born. In Marvel’s M.O.D.O.K., Poundcakes is also one of the five members of M.O.D.O.K.’s heist gang in episode 4.

While Melter joins up with M.O.D.O.K. to get back at Captain America in Marvel’s M.O.D.O.K., there are few heroes who have a bigger bone to pick with Iron Man. Melter was an industrialist providing firearms and other weapons for the US government when a safety inspection team discovered he was cutting corners and using poor materials to build his company’s weapons. The US, therefore, stopped buying from him and gave his contract to his competitor Tony Stark (aka Iron Man), driving him into bankruptcy. Much like Stark, however, Melter has a brilliant mind and designed the Melting Ray a weapon capable of melting literally anything. He went on to be one of the founding members of the Masters of Evil, making him probably one of the bigger names on this list.

Prior to undergoing a medical procedure gifting him enhanced, hallucination-inducing screams, David Angar was merely a peace-loving social activist. In hopes of elevating his activism, Angar volunteered to undergo a vocal chord altering experiment and entered a machine created by hero and Guardian of the Galaxy Moondragon. While Moondragon had hoped to make another hero with her invention, Angar was ultimately led astray after the incident and entered a life of crime. In Marvel’s M.O.D.O.K., Angar the Screamer is another member of the shield heist crew.

5. Tenpin
Like Poundcakes, Tenpin is a villain most commonly associated with a small and strange c-list villain team — and he isn’t even the biggest name on the roster. Tenpin, real name Alvin Healey, was working as a juggler alongside his brother Elton when the pair of them caught the eye of Charles Last aka Ringleader. He invited the men to join him in his villain group, The Death-Throws, where they would serve essentially as mercenaries. In Marvel’s M.O.D.O.K., he is the last of the five villains who joins up with M.O.D.O.K. in episode 4.

Just as it sounds, Hexus is a living corporation. They have no physical form and are a concept. Hexus is parasitic and grows through invading planets and feeding off that world’s resources until it is completely depleted. They also possess the power to brainwash populations, which they use to compel humans to feed their greed. When Hexus reaches maturity, they release spores that spread across the galaxy and cause the parasite to infect other planets. Honestly, I think a very fun fact that best helps comic book fans understand Hexus a little bit better is knowing that Grant Morrison, a comic book writer known for his sharp political commentary, created him. In Marvel’s M.O.D.O.K., we find out Hexus is the entity pulling the strings at one of the show’s major corporations.

Created by Tony Starks’ rival, Justin Hammer, Super-Adaptoid is an android that can copy the equipment and powers of any superhero. However, while created by Hammer industries, the model is most closely associated with A.I.M. and has been used primarily by M.O.D.O.K. throughout the comics. While Super-Android absolutely serves a more comedic role in Marvel’s M.O.D.O.K., they ultimately act pretty much the same and are seen at the beginning of the series servings as M.O.D.O.K.’s smoothie machine and housekeeper. 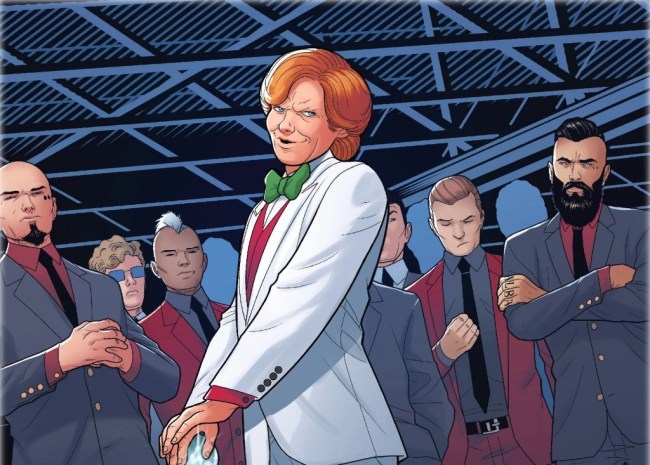 While both Green Goblin and Carnage have been called Marvel’s equivalent to DC’s Joker, you wouldn’t be wrong to draw a parallel between the “Clown Prince of Crime” and Arcade. You see, much like Joker, Arcade has given many different accounts of his life with no substantial proof to back a single one. Also like Joker, Arcade uses campy comedy to conceal his brutal nature. In the comics, he sends most of his victims Murderworld, (an amusement park filled with deathtraps) to kill them. In Marvel’s M.O.D.O.K., he appears in episode 8, where he forces the Tarleton family to do something pretty extreme.

Seeing as Marvel is the home of the X-Men, there are a lot of characters who simply were born with their powers via mutation, and Whirlwind is one such example. Whirlwind, real name David Cannon, was born with the ability to move his body at great speeds. While his gifts started him down a track of petty crime as a teenager, he got his act together and found legitimate employment as a circus performer, ice-skater, and professional wrestler. However, people took note of his talents and began to ask Cannon if he could rig competitions in exchange for a pretty penny. Once the police started to investigate the rigged events, Cannon decided he was tired of dealing with them and embraced villainy in full. In Marvel’s M.O.D.O.K., Whirlwind is seen being generally a lil’ creepy towards women, including M.O.D.O.K.’s daughter Melissa, who puts him in his place.

Brace yourself for a lot of long, fantasy words, we’re going to talk about Fin Fang Foom. Fin Fang Foom is a Makluan, a race of shape-shifting aliens from Kakaranthara, which is located in the Maklu system of the Greater Magellanic Cloud. Whew. When he and his fellow Makluan’s first landed on Earth, they touched down in China, where they cemented themselves into Chinese legend whilst attempting to plan out their world domination. In Marvel’s M.O.D.O.K., Fin Fang Foom serves as both a chef and sweet ride to M.O.D.O.K.

While these aren’t all the villains showcased in the new series, these are some of the ones with a decent chunk of screen time. To catch glimpses of even more, be sure to watch Marvel’s M.O.D.O.K. over on Hulu.