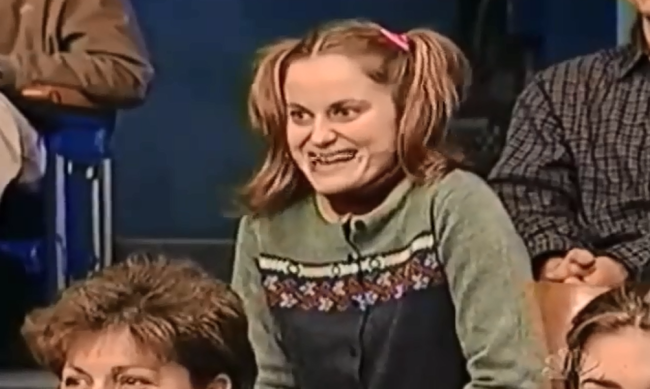 Before she was Leslie Knope on Parks and Recreation, before she and Tina Fey teamed up at the Weekend Update desk at SNL, before she was a psychotic talent show producer in Wet Hot American Summer, Amy Poehler had another iconic role under her belt: Stacy, Andy Richter’s little sister in the early years of Late Night With Conan O’Brien.

There were a bunch of segments featuring Stacy way back when, and all of them pretty much hit the same beats: Andy introduces his dorky kid sister and explains that she has/had a crush on Conan, Conan says something that gets her hopes up, Conan says something that tears them down, and then Amy Poehler turns into a black-eyed, fire-breathing lunatic. Some of them very much hit the same beats. But who cares? They are all wonderful. She essentially goes from a shy love-struck kid to a professional wrestler demanding a rematch at SummerSlam in each one. You could do a lot worse in a comedy bit.

A bunch of the clips are posted below. You really should watch them at some point, if only to see a 22-year-old Amy Poehler in a horrifying orthodontic apparatus screaming about demons and threatening people with terrifyingly specific threats of physical violence. It’s a very enjoyable YouTube rabbit hole to go tumbling down for a while.

Stacy introducing Conan to her new boyfriend from Christian camp, Justin, also played by a young Andy Daly from Comedy Central’s Review (I choose to believe Justin and Kyle are twin brothers)

Stacy finds out Conan has a girlfriend

Finally, a clip titled “Andy’s Little Sister Stacy goes on Fury! (Sock full of batteries),” which really speaks for itself