So, you get on your flight, you’re ready to enjoy your trip to whatever tropical paradise you got the best deal on, and then the unthinkable happens. Sirens. Panic. Little yellow masks falling from the ceiling. Only you forgot to listen to the flight attendant’s safety presentation because you were too busy thumbing through your phone to find the latest Candy Crush update. At this point, you’re lucky if you can remember whether your seat cushion floats.

Now you’re marooned. Stranded. Deserted on some sandy beach with no civilization in sight. Where do you turn? Well, the guidance provided to you by movies and TV, of course. So here’s a look at some key lessons you can use if you’re ever stuck on an island.

You Can Never Have Enough Bamboo

When you find yourself stranded on a deserted island, the first and most important thing you can do is take stock of your resources, and boy did the cast of Gilligan’s Island have resources. They set out for three hours on a tiny ship with enough luggage to keep them in fresh clothes for nearly 100 episodes and a couple of movies. To harness all that stuff, they turned to the mighty brain of the Professor (Russell Johnson), who…well, he still couldn’t get them off the island. This Tropical MacGyver did, however, fashion a variety of inventions from nothing but wire, a few coconuts, and lots and lots of bamboo.

Blow Up Dolls Can Be Your Salvation 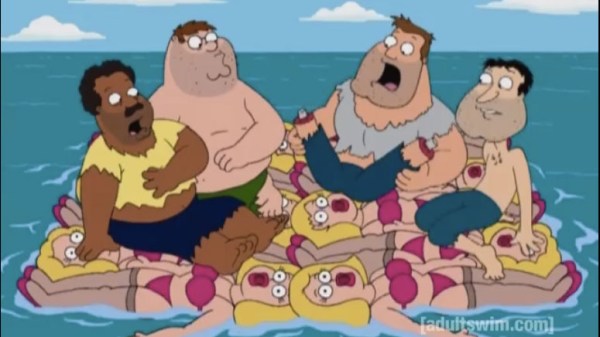 Family Guy has pretty much run through every old sitcom trope at this point, so you had to know a deserted island would come up at some point. Still, Peter and his friends deserve points for the constructive way that they tried to get back to the mainland: by stringing Quagmire’s blow up dolls together to form an icky raft. Next time someone asks you why you’re traveling with a rubber friend (or six), tell them you’re a survivalist, dammit.

Smoke Monsters Are Not Your Friend

Getting stranded is hard enough on its own. Then, of course, there’s the blood and carnage and general misery constantly running through your head. If the cast of Lost only had to deal with all of that, they’d have been through enough, but no. Then this giant smoky behemoth came howling out of the jungle at them and things got weird. The lesson from this show is clear: Ignore the smoke monster, because if you don’t you’re in for a really disappointing ending.

The Volleyball Always Leaves In The End

So, you’re alone on a beach, desperate for anything that can keep you alive, and you suddenly find a friend: An innocent, compassionate little volleyball. Tom Hanks and Wilson made the perfect couple in Cast Away, that is until Hanks decided his athletic little friend was getting a little too mouthy about his escape plan, and Wilson decided to ditch him. Don’t ever trust the volleyball. Find yourself a nice frisbee to settle down with, instead.

When In Doubt, Build A Treehouse

When you look down the long history of marooned movie and TV characters, no one made a more stylish shelter than The Swiss Family Robinson, who salvaged bits of their crashed ship (presumably ignoring the rotting corpses of the crew) to build an absolutely kickass pad among the trees.

Be Prepared To Burn The Rum

Booze is useful for all sorts of things, particularly when you’re trying to drink yourself into a stupor to forget that you’re hundreds of miles from civilization. If you’re resourceful enough, though, you can find other uses, too. In Pirates of the Caribbean, Elizabeth Swann uses Captain Jack Sparrow’s secret rum stash to help ignite a signal fire that eventually rescues them from their own marooning. Rum, nature’s duct tape. 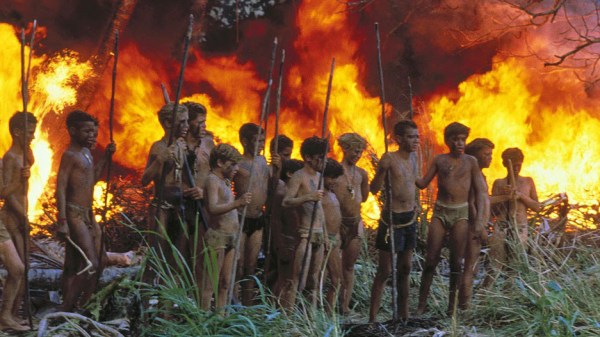 Lord of the Flies takes the stresses of organizing in the wake of being stranded and pushes them to the absolute limit. By the end, a bunch of kids have invented their own god and they’re performing human sacrifice at the drop of a hat. You can’t trust the tweens in the best of times, but if you leave them to their own devices on the beach, you’re in real trouble.

Don’t Get In A Plane With Harrison Ford

Harrison Ford is our Cosmic Space Dad, but he has a bad history with planes in movies (and no, we’re not going to talk about his real-life plane mishaps). He crashed in the Indiana Jones flicks, he basically destroyed Air Force One, and then he marooned himself with Anne Heche in Six Days, Seven Nights. Straighten up and fly right, dude.

To uncover new lessons about what to do — and especially what not to do — if you happen to get stranded on a desert island, check out the premiere of Wrecked on June 14 at 10/9c on TBS.