What Do We Want From The Second Season Of ‘Westworld’?

Westworld returns for a second season on HBO this Sunday, April 22. The first season established a world in which the rich visited an elaborate Old West theme park staffed by robotic hosts, some of whom discovered they didn’t want to be of service to human masters anymore. It was a stylish, sometimes frustrating, always compelling season of television, the opening act of a series we’re happy to see return for a second round. Below, some Uproxx contributors weigh in with our hopes for what that second round might look like.

Yes, I want the twists to feel a bit more earned and less like I’m being punk’d at the end of every episode, but I want Westworld to really lean into what was apparent by the end of season one: Maeve and Dolores need to be the focus. Those two characters embody a rage and desire for agency that feels organic to the odd situation that these characters find themselves in. The maze was fun for the first season, but I want more character work. Westworld season one often felt a little like “ok, let’s throw a bunch of cool shit at the wall and see what sticks.” Well, now we know what sticks. More of Maeve’s relationship with her daughter that she knows in her robot heart is real. More of Dolores burning things to the ground.

Plus, I’m going to need an answer as to why anyone would go to Westworld when there are other worlds available. You really want to roast in the desert and get dust in unmentionable places when you have someplace even cooler (hello, Shogun World) to spend an exorbitant amount of money visiting? THESE PEOPLE HAVE MORE MONEY THAN SENSE!

I’ve seen the first five episodes of season two, so I won’t spoil what I know about what’s coming early. But if I had a wish for the season before it’s out, it would be for Westworld to go straight Freaky Friday and body swap all of our favorite hosts: Maeve now looks like Hector! Arnold is now Clementine, and vice versa! Everyone takes a turn being El Lazo! Mass hysteria!

In Westworld season two, I’d like to see a bit more of the world outside of the park. Only a bit. The inside and expanded park areas are the bread and butter, but I’m interested in seeing what type of world needs a theme park like this. I’m also hopeful for some samurai action in an Old West setting. Charles Bronson and Toshiro Mifune showed it was possible in Red Sun, but now we can take it to new levels. I’m not interested in talk of software upgrades or security backdoors. I’ve seen Pirates Of Silicon Valley. Anything else is just playing around.

As many parks as inhumanly possible. Yes, the show is titled Westworld, but as previews of season two have already confirmed, the fleeing guests and murderously sentient hosts will also be taking a trip to Shogun World at some point. And if the series decides to draw on any more of its cinematic connections the medieval and Roman-themed parks (or something like them) will probably make an appearance. But why stick to the formula established by Michael Crichton’s original film?

Venturing out into additional dreamscapes courtesy of Delos Destinations would make for a much more enjoyable experience. (For the audience, of course. The guests and the hosts’ sadistic creators aren’t going to have a very good time, either way.) What’s more, trying out new parks would also help the show escape the somewhat problematic origins of its known parks. (For example, the “Westerners visiting the exotic Orient” trope that underpins Shogun World.) So let’s send the Man in Black and his fellow scumbags to places like “Grungeworld,” where robotic Seattle natives can choke the life out of them with endless flannel, or bash their heads in with cheap electric guitars.

After all, variety is the spice of life! Unless a host kills you… 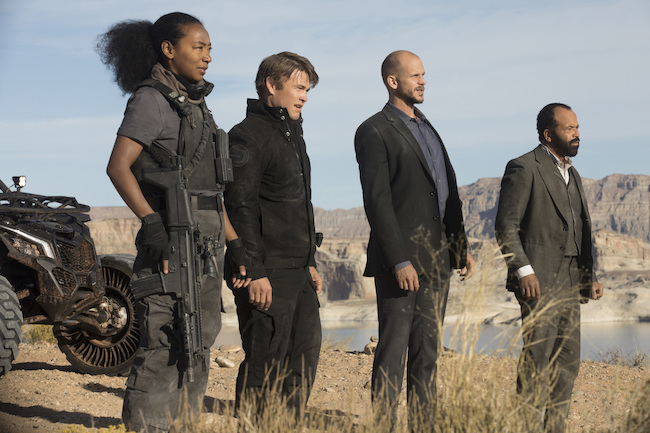 I get that some viewers got frustrated with Westworld‘s puzzle obsession in the first season, particularly when they figured out those puzzles well ahead of the show’s timeline. But, as a stupid person, the puzzles mostly worked for me and I thought the narrative worked even after their outcome had become obvious., so I wouldn’t like it if the show course-corrected too much. More than anything, I’d love to see it continue to use those puzzles as tools to explore the philosophical implications of its premise. It takes off in some far off future, sure, but the relationship between hosts and guests speaks to our own always uneasy relationship with technology and the ways in which even the most intimate aspects of our lives are wrapped up in codes and algorithms we respond to without fully understanding.

“Shimmy Shimmy Ya” on the player piano.

Look, I know everyone’s excited about Shogun World and I totally get why. I mean, who doesn’t want to see Thandie Newton slaying her human captors while dressed to the nines in silk kimonos and geisha flip-flops? But honestly, I’m more curious about what’s happening in the real world. I assume at some point, all of this promised bloodshed and chaos must spill outside the dusty barriers of the park but getting a glimpse of the real world early on in season two would answer so many questions. First off, we’d finally know where the park was located. I get that isn’t as huge of a concern as robot rebellion and the death of Anthony Hopkins but still, I can’t be the only one wondering where in the hell the Delos corp. decided to set up shop. But visiting the real world would answer the biggest conceptual question I have about this show: How the hell does Westworld market itself to the public?

I mean, if I saw commercials advertising a theme park where I could kill, maim, and have sex with artificially intelligent robots, my first thought wouldn’t be “Sign me up,” it’d be, “Where is the conservative Republican outrage?” You’re telling me that the party of family values and All Lives Matter wouldn’t be throwing a hissy fit about an amusement park filled with murder, sex, and mayhem? Are people even aware of the uprising happening inside the park? Who the hell would even sign up for something like this? How much does it cost? Are their tiers to your park experience; the gold package means you get to kill one host, but the platinum package ensures you can rape that host before you kill it? What kind of misogynistic apocalyptic hellhole must exist outside the park to convince people to sign up for this nonsense?

I like sci-fi action and people running from monsters/robots as much as the next person, but I’d also love to just see an episode where everyone is chilling and living a normal day in Westworld. I know that’s not likely since everything went to chaos at the end of last season, but I think it’d be a nice change of pace to see one episode centered around quiet reflection by the stream, wagon wheel repair, farming, and any other dull adventure contained therein. Let’s really get into the minutiae of a postgame convo between a couple of bro-y thrill-seeking bankers who’ve put their feet up after indiscriminately killing a few well-designed androids or empathize for the techs back at headquarters who are struggling to fill the day’s reconnected arm quota. Not all drama has to be splashy, you know?