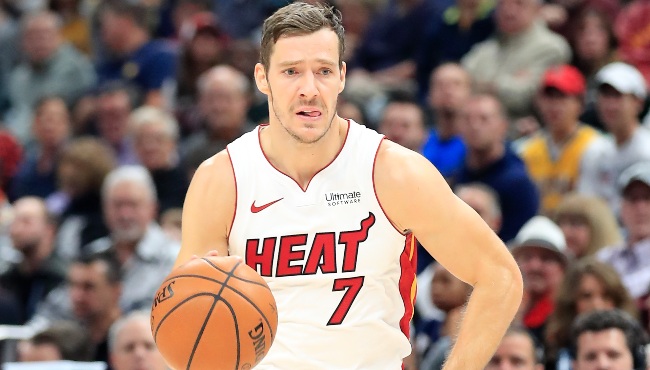 The Philadelphia 76ers, as expected, were very active on Sunday as the moratorium period began, officially opening NBA free agency.

They re-signed Tobias Harris to a near-max deal, which many anticipated, and ended up executing a sign-and-trade to send Jimmy Butler to the Miami Heat, netting Josh Richardson in return. With the extra space they had from that trade, they inked Al Horford to a big four-year deal to create a robust frontcourt, and retooling to once again be a contender in the East.

There was one piece missing from the Butler trade, however, to make money work in Miami, and shortly after the deal was reported on The Jump, Rachel Nichols relayed information from Ramona Shelburne that Goran Dragic would be headed to Dallas to make it a three-team deal. Shortly after that, Brad Townsend and Tim Cato confirmed that report.

Confirming that Dragic will be a Maverick, but what Mavs giving up is unclear.

The Mavericks have traded for Miami's Goran Dragic, multiple sources confirm. Dragic is the only other Slovenian in the league, and was roommates with Luka Doncic during Slovenia's 2017 EuroBasket run.

As Cato noted, Doncic and Dragic are close as the only two Slovenians in the league and former roommates on the road with the national team. However, after that deal was reportedly all but done, things changed. Marc Stein of the New York Times reported Kelly Olynyk and Derrick Jones Jr. will go to Dallas, not Dragic, as the Mavs opted to keep their cap flexibility more open rather than take on Dragic’s deal.

The Mavericks will acquire Kelly Olynyk and Derrick Jones from the Heat as part of the Jimmy Butler sign-and-trade, league sources say.

The Mavericks are huge fans of Goran Dragic but could not take him back in the Miami sign-and-trade with Philadelphia that sends Jimmy Butler to the Heat because Dallas feared losing its flexibility to make additional moves this summer, league sources say

Shams Charania confirmed the change in plans, and later Ramona Shelburne spoke to Dragic’s agent about what happened.

The Mavericks had interest in acquiring Goran Dragic in the three-team trade construction with Miami & Philly, but “they changed course,” his agent Bill Duffy tells ESPN. “In analyzing it, his salary was too high based on other things they’re trying to do.”

As if it weren’t bizarre enough for so many prominent reporters locally to confirm a deal and have it change that dramatically, things completely fell apart later on Sunday night, per multiple reports.

i've also been told the deal is believed to be dead https://t.co/wTaRGKyuBS

The Mavericks maintain they agreed to join the Jimmy Butler sign-and-trade under the belief they were getting Kelly Olynyk and Derrick Jones Jr., league sources say. The Heat reportedly do not want to surrender Jones and say they must trade Goran Dragic to make the cap math work

Now the Heat will need to find a different team that is willing to take on Dragic’s contract to make the Butler deal work or to be willing to give up the package the Mavs insist it was supposed to be all along. There are few teams with the space to absorb Dragic, but the Knicks could be a possibility. In any case, this has been rather unbelievable, but with the Sixers adding Al Horford all parties will have to get it together or Butler will have to seek out a new team.

As Marc Stein and Shelburne report, the two sides are very motivated to get this deal done soon, but it is Dragic that is the player the Heat are determined to move.

Miami and Philadelphia are determined to find a new third team to facilitate their Jimmy Butler sign-and-trade and ensure its completion, league sources say, after the apparent collapse of the teams' talks with Dallas

The Heat is still working on options to complete the Jimmy Butler sign and trade with Philadelphia, according to a league source. Out of respect for Goran Dragic, the Heat are working with him and his representatives to find a trade partner by July 6.

Goran Dragic is the player Miami is determined to move to make the Butler salary-cap math happen and believes it can find a workable trade construction elsewhere that ultimately lands Butler with the Heat on a four-year, $142 million max deal

With the Clippers getting a deal done with Patrick Beverley, and Dallas apparently bowing out of talks over not wanting Dragic as he’d clutter up their other plans, that would leave the Lakers and Knicks as the only possible suitors that could take him into space. L.A. seems like the coziest fit if they fail to land Kawhi Leonard, but if Leonard chooses the Lakers, things could get very interesting with regards to this sign-and-trade that has become a fiasco.