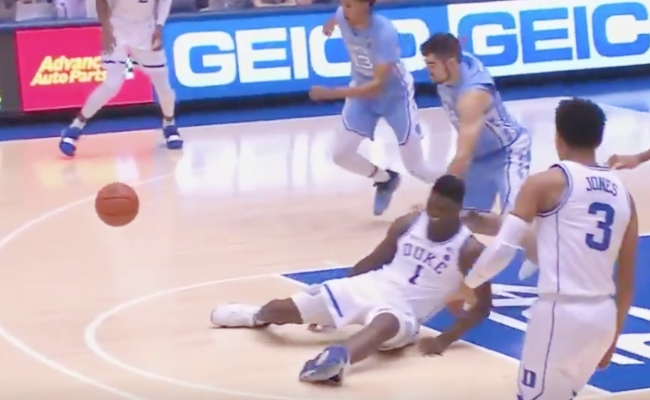 The stars were out in Durham, North Carolina on Wednesday night to watch No. 1 Duke and No. 8 North Carolina face off for the first time this season.

The main attraction, of course, was Zion Williamson, as the lock to be the top overall pick in the 2019 NBA Draft is as must-see as it gets in college sports. Williamson’s first taste of college basketball’s biggest and most storied rivalry was enough to bring people in from all over, including Barack Obama, Ken Griffey Jr., and Spike Lee.

However, just 30 seconds into the game, Williamson was forced to leave with an apparent leg injury after he ripped completely through his left shoe while planting, causing him to slip awkwardly and do the splits at midcourt.

You can see in the video Williamson’s foot goes completely through the side of his PG2.5’s, as the upper separates from the sole and causes him to slip and go down.

Williamson would leave the game for the locker room with the trainers, and it’s unclear exactly what he injured. It could be just about anything, as his right hamstring gets stretched out, his right knee bends awkwardly, and his left ankle even may have rolled. Hopefully, whatever it is, it isn’t too serious and he’ll be able to return this season, should he choose to.

ESPN’s Maria Taylor reported Williamson’s stepdad went to check on him in the locker room and returned to the stands not long after, while Williamson remained in the back to “test” something.

LeBron James, who glowed about Zion after seeing him live recently, offered his best to Zion on Twitter.

Hope young fella is ok! Literally blew thru his ?. ??

Duke officially announced Williamson had suffered a knee injury and would not return to the game with Duke down 30-17 late in the first half.

The good news is Coach K called it a “mild knee sprain” after the game, and Williamson will undergo further testing on Thursday to determine a timetable.

Coach K on Zion Williamson: “It’s a mild knee sprain. The knee is stable. We don’t know how long he’ll be out.” pic.twitter.com/ybGMKkuzqx

Coach K: “We’re very concerned about Zion. It’s a mild knee sprain. We will know about length of time tomorrow. It’s stable. Obviously it has an impact. You lose the NPOY on the 1st play.” pic.twitter.com/SCq6DBjnkJ