Art has always been nearly impossible to define. Its merits are largely subjective and everyone experiences each piece differently. Think about it: How do you feel when you look at the Mona Lisa? Or Banksy’s street art?

It’s an interesting thought experiment to define art by the reaction of the audience. If one viewer weeps with joy in the presence of DaVinci’s masterpiece, then for that person, the Mona Lisa is art. On the other hand, if that same viewer comes across one of Banksy’s many renegade pieces and feels nothing, they might not be so quick to put the “art” label on the work. Art is about relationships — between the artist and the work, and then the work and the audience. It is active, it is alive — it is not stale, is never passive. When Moby Dick was published, it was not considered art but, when we read it today, we consider it a masterwork.

Which can only mean that new works of art are being produced every day — pieces that have the ability to evoke an extreme emotional response from their audience. There was a time when Banksy wasn’t famous and, yes, same for DaVinci. In both instances, it wasn’t some exact science or award or exhalation that transformed these creators into renowned artists, it was the emotions that were created by an audience viewing their work.

What artists are out there, right now, working as unknown geniuses? The truth is, there are hundreds — if not thousands — of living artists producing some of the most influential art of our lifetime. Here are a few of our favorites (that you might not know about yet):

Wood carving is a time-honored tradition of craftsmanship, skill, precision, and artistry. It’s a trade that often calls for a select set of tools — specialty knives, mallets, razors, sanders, and grinders — as well as expert level concentration and steadiness.

That is, unless of course, you’re Griffon Ramsey. She only needs a chainsaw.

Ramsey’s work is known best for its flow, a trait that is uncommon to many chainsaw artists. Instead of rough, bulky sculptures, Ramsey produces vibrant, lifelike pieces that have earned her the attention of art critics the world over.

Kozyndan’s illustrations and paintings mix flat colors with extreme perspectives to create mind-bending panoramas that flow seamlessly between realism and surrealism. Each piece is immensely colorful and clever, often representing detailed visual puns and thoughtful commentary. It’s work that is at once playful and contemplative, cartoonish and garish, serious and aloof. Kozyndan’s work often represents a tense dichotomy — which fits — because Kozyndan is actually two people.

They are a husband-and-wife duo that work together as one cohesive unit. The end results are highly detailed paintings, drawings, illustrations, and mixed-media pieces that fully embody the playful back-and-forth that is alive and well in their real-life marriage.

The result is damn cool, too. 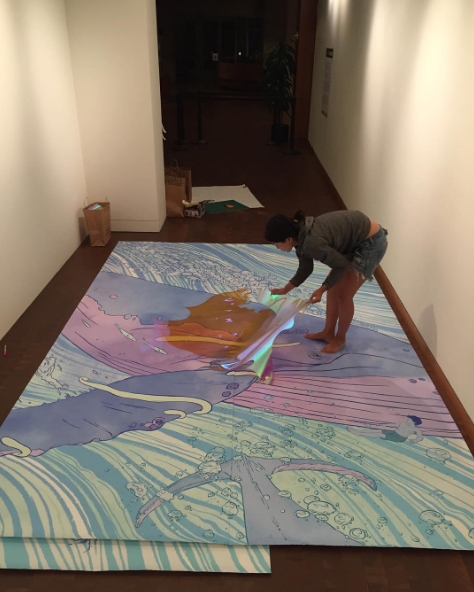 Nina Chanel Abney’s work is important. Not just because it’s beautiful, not just because it shows a mastery of space, and color, and visual weight, but because it captures the time in which it’s made. When you look back at great art — the pieces that have endured for centuries — it always acts as a snapshot for the world in which it is created.

Abeny’s work does that perfectly, while championing the Black Lives Matter movement.

Her pieces loom large — mirroring the larger-than-life issues that they represent. They’re smart, creative, and evoke an emotional response in the viewer that is (for many of us) life changing. 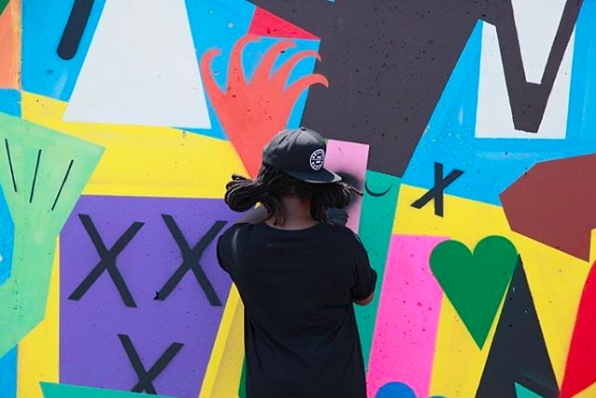 Can cross stitching be art? Of course it can. Little is known about the enigmatic “Sea of Doom,” or Bat Queen as she’s known in certain circles, but her highly detailed, extremely colorful, often pseudo-goth cross stitches are, at the very least, works of fine art.

Known primarily for bat portraits, Sea of Doom’s work is not dissimilar to the image one might conjure when thinking of Liberace’s vampire grandmother. Does that make sense? Don’t worry, it doesn’t have to. You won’t see this artist in any gallery, but you can (if you’re lucky) grab one of her cross stitches from her Etsy shop when they are available (which is “rarely” — demand is insanely high).

She is a self-taught painter who spends, on occasion, up to 15 hours at a time painting herself. The results are amazingly detailed, hyper-realistic costumes built entirely out of paint. Each photo might look like a full costume but, don’t let your eyes deceive you, it’s all paint.

Raw artistic talent can’t be taught, but it sure can be nurtured, and Sam Vernon nurtured her talent at Yale, where she earned an MFA in painting and printmaking. Since graduating, her work has combined the everyday antiquities of scanner copies, colored paper, and collage.

Much of her work is built upon Xerox copies of images, sometimes drawings and photographs, or copies of paintings, combined with new layers of ink or paint or even sculptural components. Her goal is to explore the story of being human and, with these simple, rudimentary tools, she creates complex works that conjure deep emotions. One of the most interesting things about her work is that it takes items that are around everyday people and transforms them into something extraordinary.

Tschabalala Self’s work is defined by a bright palette of colors, often used in large, simple shapes, to depict the female form. Her images are not unlike some of Picasso’s work, who was known for creating strange, surrealist and cubist portraits of female models. This comparison is arguably intentional, if only to highlight Self’s focus on the black female form as it’s seen in contemporary culture.

There are significant and prominent conceptions about the black female body in modern, popular culture. Many of these attitudes are rejected by Self’s paintings, though, on occasion, some are accepted. Where Picasso’s portraits often objectified the female form, Smith’s work flips perception on its head.