‘Mad Max: Fury Road‘ Doesn’t Let ‘Plot’ Or ‘Dialogue’ Get In The Way Of A Damn Good Time 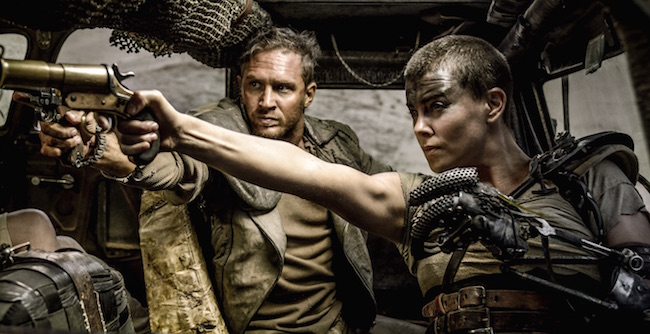 Watching modern studio movies today, often I find myself thinking, “Boy, there’s a lot of plot in this movie.” These thoughts often come during movies that I enjoy, like either of the Avengers movies. There’s a lot of plot in most movies, but I don’t remember everything always being so convoluted. Look at a movie that everyone loves, like The Empire Strikes Back: The plot of that movie is basically, “We need to leave where we are and try to get somewhere else,” but because everything else is so riveting along the way, it doesn’t matter. Adding more convoluted plot just seems like a way to cover the fact that there’s not much else going on.

Mad Max: Fury Road has one of the most straightforward plots in a studio movie that I’ve seen in a long time. Basically, our characters drive a long way in one direction, then they decide to go back the way they came. That’s it. (My dumb joke is, being that the third Hobbit movie changed its title, they could have called this Mad Max: There and Back Again. I know, groan.) Also, there’s very little character development. As you may have heard, Tom Hardy’s Max Rockatansky has very few lines in the film. Max is certainly around for the whole movie, but this isn’t a movie dependent on dialogue. It really could have been a silent film. Part of me wishes George Miller would have tried that, just to see if it could be pulled off.

So, with the simplest of plots and not much dialogue, here comes Mad Max: Fury Road, one of the most in-your-face enjoyable things to watch in a very long time. There has to be some sort of lesson to be learned here about modern filmmaking, to not let your convoluted plot get in the way of an enjoyable movie. You’ve probably seen those Mad Max: Fury Road trailers – aren’t they great? Hey, guess what: The entire movie is just like those trailers… Mad Max: Fury Road is like watching a non-stop, two-hour-long action-packed trailer.

Charlize Theron plays Imperator Furiosa, who is probably the main character of this movie (she has the most to say, at least). She frees a group of five women who were the wives of a local dictator named Immortan Joe (Hugh Keays-Byrne). As she races across the desert with these women, she’s chased by Immortan Joe’s gang, which includes a captured Max Rockatansky (Nicholas Hoult’s character, Nux, is using Max’s blood as some sort of personal rejuvenation project… this is a really weird movie). Eventually, Max escapes and teams up with Furiosa and off we go. The whole movie is one big long car chase across the desert, filled with stunts and car wrecks and a noticeable lack of CGI. Watching Mad Max: Fury Road is like watching the circus. It really is just non-stop “stuff,” but not in an intrusive way.

After watching Mad Max: Fury Road, I re-watched The Road Warrior for the first time in over 20 years. I remember once thinking of The Road Warrior as a weird movie that had crazy car chase sequences. Compared to Fury Road, The Road Warrior seems very tame. Mel Gibson’s Max himself comes across actually kind of normal; he’s just a guy making his way through this dystopian future looking for a little gasoline along the way. Gibson’s Max seems a lot less “mad” and a little more introspective and lonely, but I guess Forlorn Max wouldn’t have made a very good movie title. As a contrast, Tom Hardy’s Max is legitimately mad, in both an angry way and a crazy way; he’s constantly having flashbacks to a young girl who dies that Max couldn’t save.

If I had written this piece immediately after watching Mad Max: Fury Road, it would probably be much different. Again, this movie is a lot. And there are characters who are just plain gross-looking and, well, again… it’s a lot. But, over the next few days, I just couldn’t stop thinking about it. It’s as if there’s so much visual stimulus to take in, it takes a couple of days for your brain to catch up and report back, “I’ve decided that you enjoyed that movie.” And that’s the thing, even if you wind up not enjoying Mad Max: Fury Road, it impossible to not kind of be in awe of the spectacle. We might never see anything quite like this again.

(For the record: In 10 years, Mad Max: Fury Road will be everyone’s favorite movie.)