On Thursday, my friend and colleague, Matt Singer, suggested I should see The Emoji Movie. I want to be clear, it wasn’t necessarily a recommendation because he liked it (he did not), but just said it was something I should probably see. And, unsurprisingly, this intrigued me enough that on Friday morning I paid to see The Emoji Movie at a theater on Manhattan’s Upper East Side. While watching, I kept a running diary of my experiences while watching The Emoji Movie. Heres’ how that all went.

10:17 a.m.: There are a surprising amount of people here to see The Emoji Movie first thing on a Friday.

10:23 a.m.: Okay, like 50 people just poured into this theater. This is some sort of field trip. A field trip to see The Emoji Movie

10:32 a.m.: The crowd seems to like what they see from the trailer for Jumanji. I think I liked it.

10:35 a.m.: Why am I watching the characters from Hotel Transylvania? What is happening?

10:45 a.m.: Poop made a “number two” joke and one person in the theater laughed really loud.

10:50 a.m.: Whoever came up with the idea for this movie should be in prison.

10:55 a.m.: I would purchase a Blu-ray of Patrick Stewart yelling at his agent between takes.

10:57 a.m.: The meh emoji is named Gene. Because Gene can’t do his job properly, he’s just been informed he’s going to be executed. This is grim.

10:59 a.m.: The basic structure of this movie is very confusing. I could write 1000 words about how the work/life balance of each emoji makes no sense. I mean, I won’t be doing that, but I could. The gist is that each emoji has to show up to a big stage every time the phone user uses an emoji. This seems very inefficient. My gosh, I really could keep going. I’m going to stop though.

11:02 a.m.: In a shocking twist, the audience for this movie didn’t laugh at the Pong reference.

11:02 a.m.: It turns out a “Bye, Felica” reference went over about as well as the Pong reference. I’m shocked the audience for The Emoji Movie hasn’t seen Friday. 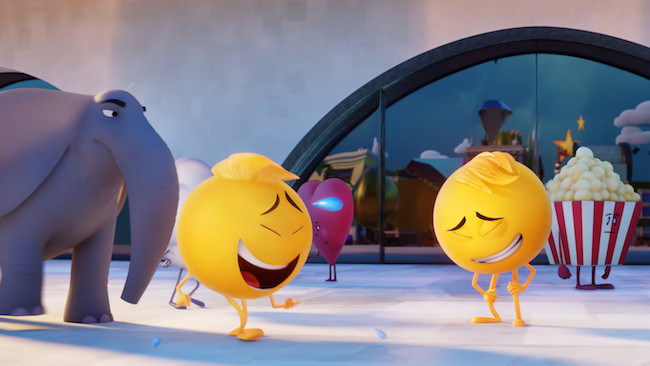 11:03 a.m.: An elderly woman just came in and sat down next to me. I have so many questions about this.

11:05 a.m.: As it turns out, this audience also didn’t get the Twisted Sister reference.

11:17 a.m.: I just accidentally made an audible yawning sound because I forgot there was anyone else in here because it’s so quiet.

11:31 a.m.: I should mention the reason Major Lazor’s “Bubble Butt” is playing is because the emojis are now hanging out in the Spotify app.

11:36 a.m.: The emojis are trying to make it trough a firewall – which I am pretending is a reference to the 2006 Harrison Ford movie because that makes about as much sense as anything else.

11:41 a.m.: This is by far the most interesting that that has happened so far during The Emoji Movie.

11:49 a.m.: The Emoji Movie is now showing a highlight montage of all the scenes I just watched over the last 70 minutes.