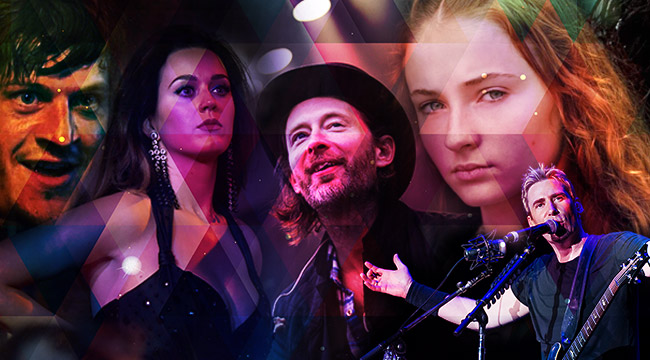 The Battle for the North is nearly upon us. The winter winds are rising — but we’ll get to that later. Zombies are slow walkers. Everyone knows these things. And similarly, everyone knows that the penultimate episode of this season of Game of Thrones, “Battle of the Bastards,” will feature the Jon Snow/Sansa 2.0-led assault on Ramsay Bolton to take back Winterfell. There will be blood, some sweat, a few tears and a few cheers (for when Ramsay hopefully dies. Fingers crossed!) It’s all very exciting.

Game of Thrones most likely won’t take us inside the private and quiet moments of the battles’ major players like Jon, Sansa 2.0, Ramsay, and Davos before the action gets going, so we are left to our own imaginations when it comes to wondering what those times would be like. Sure, we’ll get some quick shots of the characters staring out at the horizon or something of that nature, but more specifically, we want to know what kind of music they are listening to as they get amped for battle. That’s important. We all have our preferred pump-up music; our hype music. What’s theirs?

What does Jon have on his “Time for War” Spotify playlist or what does Ramsay have on his “Sweet, I Get to Kill Some People” Apple Music playlist? What CD is Davos listening to? Yes, Davos still listens to CDs. Sansa 2.0 only has a handful of songs on her iRaven, but that’s all she needs. They’re good songs.

By searching for them on their preferred streaming service, or leafing through their CD book, or scrolling through iRaven, we are able to find out what five songs each of these characters listen to when it’s time to get revved up for a battle.

We can all agree that before he died and was resurrected, and after, Jon Snow is an emo young man. He never met a dissatisfied grimace he didn’t like. That emo spirit doesn’t leave as a battle gets closer. Jon is not one to get all fired up. He is more likely to retreat into himself. His music choices largely reflect that.

Jon is also a very literal young man whereas Ramsay is a very violent young man. So in Jon’s mind, a song titled “One of Us is Gonna Die Young” makes complete sense, which is why it can be heard blasting inside his tent as he pulls back his locks into a tight man bun. Jon has a soft spot for glam rock, too. It’s something he casually mentions on third dates. “Stay Positive” by the Hold Steady has become somewhat of an anthem for him since he came back from that whole stabbing thing. You’d have problems with maintaining a positive attitude, too, if you were brutally murdered by your co-workers.

According to Ramsay, the golden age of music was the late 1990’s and early 2000’s, when rap-rock dominated the airwaves. Hence why he’s frequently heard playing Limp Bizkit and Korn at obnoxiously loud levels. Ramsey loves Puddle of Mudd and Disturbed. And dude, Drowning Pool? Ramsay knows every single word of “Bodies,” which is why it’s the first song on his list.

If not for someone forgetting the AUX cord, Ramsay would be blasting “Bodies” on a regular basis. But a now-fired intern forgot House Bolton’s one AUX cord at the Dreadfort, and for all its charms, Winterfell isn’t much for stocking current A/V equipment. It’s a real shame. Ramsay is left to listen to it on his Walkman as the men prepare for battle. It really is their loss.

Sidenote: These same men regularly make fun of Ramsay behind his back for listening to Nickelback.

Sansa 2.0 is becoming one of my favorite characters on Game on Thrones because just like Janice in Accounting, Sansa just don’t give a damn. Jon can listen to all the emo music he wants, Sansa is getting fired up! The scene in her tent looks like the Alpha Phi house on a Friday night. She’s dancing, singing into the mirror, texting her besties to get the deets on what’s going on. Usual stuff.

If Jon had a quarter for every time Sansa suggested playing “My House” as they approached Winterfell, he’d be loaded. Sansa also ends every conversation about strategy with, “It’s going down. I’m yelling timber!” Then Davos asks Jon what she’s talking about. Jon just has to tell him that he’ll explain it later. But he never does. Poor Davos.

Our man with the 20-year-old CD book! You can try to explain the idea of streaming music to Davos but you’d be better off outlining the very real threat of the White Walkers to the good people of Dorne. Davos is a pretty even-keeled dude; even before a battle, he’s not going to get especially pumped up. It’s not his style. Sure he can dust off the old Motörhead CD he has, but his Motörhead days are behind him. He fondly remembers jamming out to “Ace of Spades” with his homey Stannis a few years back. These days though, Davos mostly listens to Led Zeppelin.

Davos will break out the Tom Petty. But only if they win.