Two of the Bay Area’s premier artists have found themselves at odds after a case of hurt feelings led “F*ck It Up” rapper Kamaiyah to vent to her followers Instagram Live in the wake of Kehlani’s album announcement for It Was Good Until It Wasn’t. During the livestream, Kamaiyah called Kehlani’s Bay Area’s origins into question, telling her fans, “I don’t f*ck with her at all–at all. She know why. That’s that.”

Kamaiyah’s beef seems to stem from her verse — and that of Keyshia Cole, another Oakland resident — being removed from Kehlani’s hit song “All Me.” Kamaiyah admitted to feeling disrespected. “I feel like it never should have came out,” she says “I never wanted ‘All Me’ to come out and she wanted ‘All Me’ to come out… It was our song, we did a project together… if anything I was genuine. My problem came from the disrespect. It was out of hand. It was on some, ‘Oh you’re Black, you’re ghetto, you’re not tasteful.'”

Kamaiyah says she doesn’t fool with Kehlani anymore and that she isn’t verified in Oakland. They were just working on a joint mixtape last year. 🤔 pic.twitter.com/aIG2xteHac

Shortly after, Kehlani seemingly addressed Kamaiyah’s outburst on Twitter with a series of now-deleted tweets in which she appeared to take the high road. However, she quickly removed the tweets from her timeline, perhaps hoping to douse the speculation from curious fans. I’m still not speaking negatively on someone I once cared about,” she wrote. “That I have a matching tattoo with. That I respected and admired.”

She tried to explain the situation but also pointed out harmful retaliation from her former collaborator. “Business didn’t work out on a collaborative project,” She elaborated. “I withdrew and got a ‘green light’ on my family and friends. And it’s still love on this side. reached out countless amounts of times to be adults. to say ‘You have been around my child.’ Still met with internet antics, false rumors that don’t make any sense, and threats to my life. & me all of a sudden not being from the same city that I was from when we were cool.”

Kehlani also explained why the disagreement hadn’t been hashed out behind closed doors. Since no phone calls or texts have been answered in months, I’m responding here. You supposed to be happy — I’m very happy and about to drop a project I’m super proud of just like you did a few months ago.”

However, after deleting the above texts, she was questioned about the accusations Kamaiyah made during the Live alleging that Kehlani called her “Black, ghetto, and not tasteful.” She shot back, “Please do not take this bold ass lie and f*ckin run with it. Y’all KNOW this don’t even SOUND RIGHT. And this could really hurt my fans. Hurt my daughter, hurt my family members. Come on now. This is where I draw the line.” 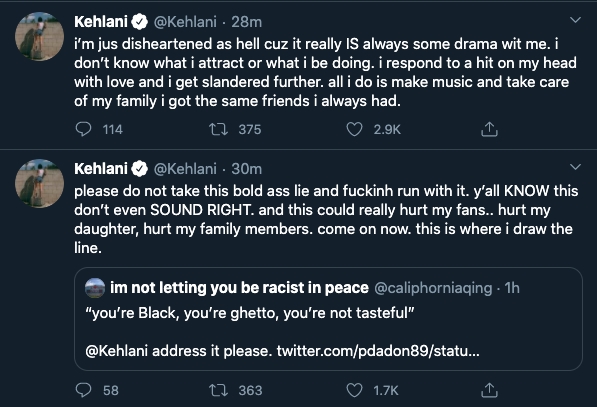 Those tweets were deleted as well, but hopefully, the two Bay Area representatives can get on Zoom or something and settle this out of the public’s eye.