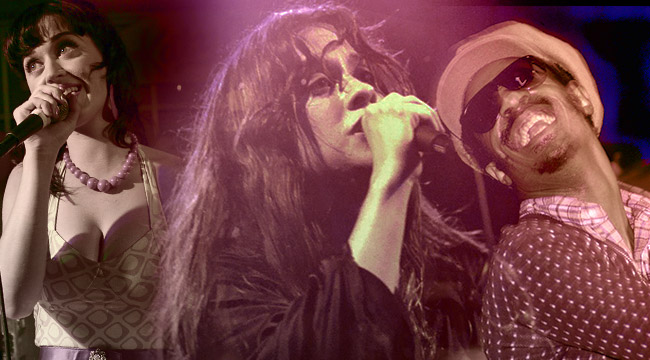 The typical narrative of making it in the music business involves a move away from home in the late-teens to early twenties, years of grinding, touring and promoting yourself to maybe get a few semi-successful albums out before touring on the strength of a single you’ll probably end up hating for years to come.

But not everyone takes the long way ‘round. There are quite a few musicians who leapt into show-business at an impossibly early age, driven by an insatiable hunger (or something that a psychiatrist would love to sink their teeth into down the road).

Below we’ve compiled some of the most notable instances of stars leaping into the limelight while they still kept their song stashes in a Lisa Frank notebook.

Katy Perry launched herself to super-stardom when she was already a full-grown adult. Otherwise, “I Kissed a Girl” would be much less cheeky fun and more of a creepy, subterranean curio.

However, Perry really started her career nearly a decade before when she left high school at 15 with a GED and moved to Nashville. She released her first album (a Christian pop album under the name Katy Hudson) in 2001 when she was only 16.

The star of our latest Uncharted episode made a similar decision to the one Katy made (with the obvious caveat that she wasn’t even born at the time Perry took the plunge).

Ellise Gitas finished high school early to move to Los Angeles and start a career in pop music. When we asked her about the decision, she was remarkably matter-of-fact for someone not yet old enough to drive on their own.

“I wanted to pursue singing as a career,” she said. “And L.A. is the place you go to do that.”

Lest you think starting early is only the domain of pop artists, you should know that the Queen of Soul was scoring hits at a young age. Aretha Franklin came up singing in the church and it wasn’t long before people noticed her powerhouse of a voice. Her father took her on the road as part of a traveling gospel show and she released her first record with Detroit’s Battle Records at the age of 14.

It took another five years for Aretha to start releasing the secular music she’s known for, because she waited until she was 18 to admit to her father that she wasn’t interested in sticking to gospel.

Though Alanis Morissette would likely want you to forget it, she had a career in pop music as a young girl long before she became Generation X’s quintessential singer-songwriter.

Though she’s a relative late-bloomer in the context of the list, she found major commercial success a lot earlier than most. Starting at the age of 17, Alanis released two dance-pop albums with the first (1991’s Alanis) going platinum and the second (1992’s Now Is the Time) netting three Top 40 singles.

Getting a jump start on a long musical career isn’t just a ladies’ game. Stevie Wonder was signed to Motown at the age of 11 and released two albums before his 12th birthday. “Fingertips Pt. 2,” a live recording from a tour with “Little” Stevie Wonder, gave the singer his first hit. It took the top slot on Billboard’s Hot 100 singles chart when Wonder was 13, and he’s still the youngest artist to hold that position.