Cam Newton is probably going to be your NFL MVP this season, barring something crazy happening in the last couple of weeks. The Panthers are 13-0, and Newton continues to dazzle every time he steps onto the field with highlight play after highlight play.

In addition to his great play on the field, Newton appears to be having more fun than anyone this season. Whether he is going out of his way to give his touchdown balls to kids, or doing his now-signature dab everywhere he goes, Newton is having a great time, and winning while he’s at it.

The latest example of Newton cutting loose is him riding his Skywalker hoverboard all around the streets of Charlotte, and photobombing amateur photographers while he’s at it. One reddit user was just trying to take some pictures of the city when all of the sudden someone brushed by him riding his levitating board, and it just so happened to be the Panthers’ pro bowl quarterback. In case you were thinking that he didn’t get a long enough look to know for sure it’s Cam, remember that Newton has a history riding hoverboards around.

One second after the epic photobomb, he was gone. 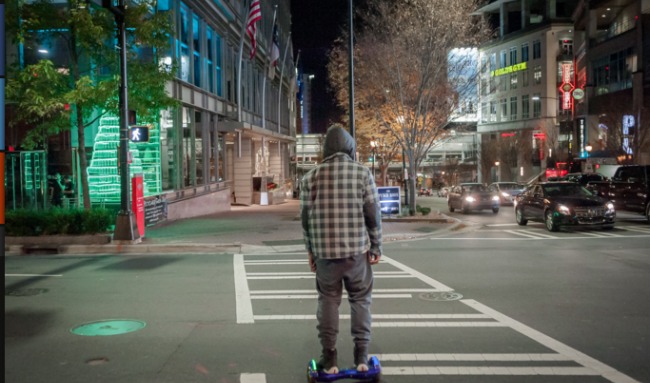 Cam Newton is the best.