Earlier today, Netflix dropped the first trailer for Sweet Tooth, a DC Comics-based science-fiction series headed to the streaming service in just over a month. While the name might ring a bell for more avid readers, there’s no denying Sweet Tooth is a bit more niche than the comics folks have come to associate with powerhouse publisher DC Comics and their former imprint Vertigo. However, if there’s something the comic book movie craze has taught us, it’s that lesser known does not mean lesser quality, and ventures into these smaller properties can offer fans an exciting chance to discover stories previously unheard.

While we plan on letting Sweet Tooth do most of the talking when it hits Netflix on June 4, here is a bit more about the series to clear up any questions you might have now and get you even more hyped for the “Max Max meets Bambi” adventure. 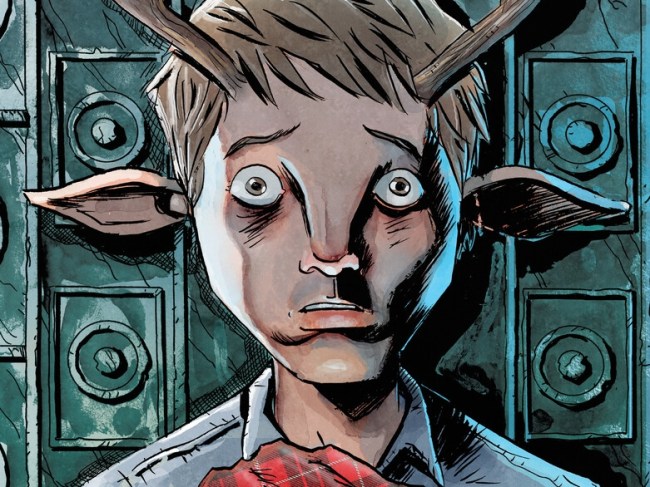 Created by comic book writer Jeff Lemire — who is known for his work across both Marvel and DC Comics — Sweet Tooth is a post-apocalyptic series that ran from 2009 to 2013 and spanned 40 issues. The comics follow a young boy named Gus (later given the titular nickname, “Sweet Tooth”) who was born just a bit different looking than his parents: half-deer, to be precise. We come to find out that Gus isn’t the only animal-human hybrid, but is rather just one of many children faced with the same unusual condition. At the same this is happening, a plague is beginning to wipe out mankind, and many scientists believe the children might have something to do with it.

After a tragic occurrence at home, Gus is forced to leave his secluded Nebraska home (which looks significantly more Pacific-Northwest in the show) and team up with Tommy Jepperd as he faces hunters, scientists, and betrayal. While wide-eyed Gus and charming scenery might make this story seem a bit lighthearted and fanciful, Sweet Tooth is anything but, at times becoming extremely dark, bloody, and bleak. While the whole aforementioned “Mad Max meets Bambi” description fits pretty well, the gamers out there might feel the series invokes some real The Last of Us vibes — a property that’s also getting the streaming service treatment here soon.

With Robert and Susan Downey producing, Jim Mickle directing, and a cast featuring Nonso Anozie, Will Forte, Adeel Akhtar, James Brolin, and newcomer Christian Convery, Sweet Tooth is looking to be a sweet time — when it’s not being incredibly sad, that is. Pending any delays, the show is set to hit Netflix on June 4th.