How To BBQ Brisket In An Old Propane Tank: A Father-Son Story

When I was a kid, we ate out at places with actual silverware four times per year. Tops. We weren’t poor, exactly, but we also weren’t keen on extravagance. Most of the extra money went to Christmas and birthday presents for us kids. When it came time for a special meal we usually made it ourselves.

There was no foodie ‘cue craze back then, unless I completely missed it. I can’t remember adults trading dry rubs like currency, or obsessing over sauces, or excitedly debating which smoking technique was the best. There were no food bloggers fetishizing cuts of meat and favorite barbecue joints either — you cooked brisket and you did it at home.

I’m pretty sure that when my father started making barbecue, he was terrible at it. First, he didn’t have experience, and second, he was working with shoddy equipment. I remember being 6 and thinking that his brisket was tough and boring.

Then, dad got serious about his barbecue. He found a friend who was skilled at welding, and procured an old propane tank that he could convert into a pit. When I write “old propane tank,” I’m not talking about those things you exchange at Walgreen’s to keep your gas grill up and running. I’m talking about the massive vessels that would heat entire homes during winter — those 8-foot long jobs. 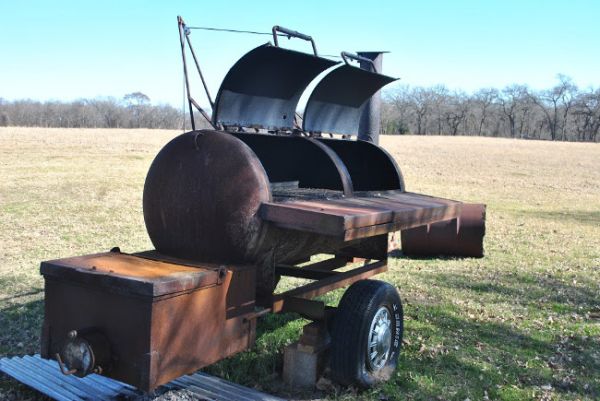 I became my father’s helper at the pit — tending the fire, mopping the meat so it wouldn’t dry out, and generally making sure the smoking chamber never got too hot or too cold. Eventually, I became the seasoning expert while dad focused on the smoke. I would rub briskets down the night before, with brown sugar and salt and smoked paprika and cayenne pepper. The recipe was never the same, just like the cooking time was never the same, but by and by we perfected our method.

In the years since, many a family friend has told us that we make the best barbecue they’ve ever tasted. I don’t mention that to brag, because the truth is that on any given day any given pitmaster could make the best barbecue the world has ever known. That’s the beauty of this particular style of cooking. It’s both methodical and unscientific. It rewards both the nerd and the spontaneous artist. It’s the kind of cooking that can easily bog you down in discussions of rubs and smoke times and sauces, but it’s also the kind of cooking that feels flavored by nostalgia as much as anything else.

So, here’s roughly what my dad and I do to make meat that tastes like home:

The Night Before — say, 10 p.m. — I rub down two briskets (10 to 14 pounds or so; like I said, we ain’t exact down here) with a spice rub of my own making. It’s never the same twice, which is part of the fun, but it’s always a mixture of the following: Kosher salt, brown sugar, cayenne pepper, smoked paprika, cumin, chili powder, onion powder, garlic powder, and dried thyme. The first two ingredients should be mixed in greater proportions than the others, but just mix it up until you think it tastes right. Then lovingly rub that all over the meat (really get in there; seduce that brisket), cover with foil, and pop it in the fridge until smoking time.

The Day Of: Get a fire going in your firebox, whatever that may consist of. You can use newspaper coated with oil, you can use lighter fluid, whatever, but if you use any kind of chemical, make sure to give it a half hour or so for the chemicals to burn off before you lay the meat on, otherwise it’ll taste weird. We use live oak, because that’s what’s native to our land, but we also make sure that it’s been drying out for at least 10 months, and that all the bark has been stripped off (Bark covered in moss = Bad Flavors). We like our fire to be hot enough that it makes the smoking chamber somewhere in the 225-250 degrees Fahrenheit range. Your mileage may vary. It’s just what works for us.

Meat Time:  Once you’ve got a fire going that’s producing decent smoke, it’s time to deploy the meat. We generally cook at least two briskets, weighing between 10 and 14 pounds, because we feed a crowd. You can adjust that however you like, but just be mindful of the temperature inside the smoker. We lay them out, rub and all, in the pit, as far away from the fire box as we can. I like fat side up; others argue for fat side down. Again, it’s up to you. Tinker with it.

At this point, you want to check in every half hour or so, to make sure the fire is neither too hot nor too cold. Stoke the fire and add more wood as needed, but just make sure the meat never gets too hot. Again, this is all at least partially based on judgement calls. If you screw it up the first time, don’t get discouraged. Try again. Brisket is on sale several times a year, and this is a Process.

Moisture Watch: Smoking meat is a surprisingly delicate process — in that if you introduce too much heat and smoke your meat will basically become shoe leather. My father and I have learned this the hard way many times, and so dad has come up with a moisture-inducing “mop” to keep the meat from drying out. Basically he mixes water, a little oil, a little balsamic vinegar, and some spices (I might chuck some Louisiana-style hot sauce in there, but it’s up to you) in a pot on the stove, then brushes it over the brisket to add a little new moisture to the proceedings.

You can do this any time, but it’s basically a matter of watching your meat and knowing when the delicious brisket char on the outside is starting to dry out. Some people use this moment to brush sauce on, but that’s basically going to just caramelize into a blackened crust, in a bad way. Moisture is key right now. Sauce comes later, if at all.

Know When Enough Smoke Is Enough: We smoke our briskets at least eight hours, or as many as 12, depending on the size and the way the cooking process is going. About two to three hours into that process, we often like to wrap the briskets in foil, so they get less smoke but keep getting heat. Again, your mileage may vary, and it’s the kind of thing you have to play with. If you like more smoke, leave the brisket bare longer. If you like less, maybe start wrapping things up sooner. It’s not an exact science. It’s just what we like. You’ll have to tinker around to find what you like.

When Is It Done?: Again, this varies depending on how hot you let your smoker get, how big your brisket is, and how long you plan to keep the meat in the pit. We like somewhere around 170 degrees Fahrenheit, but of course resting the meat will take it a little higher than that. Always rest the meat, too. If you hack into it right away you’ll get a deluge of juice that will then rob the meat of its moisture. Give it at least 15 minutes in that foil after pulling it from the pit, then go for the carving. If there’s still fat clinging to the meat you can carve it off, or you can just enjoy it at the risk of your cardiovascular system. I’ve done both.

If you’ve done this right, you’ll have ridiculously tender, succulent Texas brisket that friends and family from miles around will rave about. But here’s the best thing: You don’t have to do it “right.”

I’ve been cooking brisket for at least 20 years, both with my father and by myself, and it’s never been the same twice. This isn’t an equation you need to solve. It’s not a diagnostic test you need to pass. This is a cooking tradition, meant to be shared by families, that evolves with the people who make it. As the American barbecue craze has taken hold, and more and more trendy restaurants and reality shows have been devoted to the practice, we’ve started to see barbecue as this particular, exact science that we need to perfect in order to call ourselves true Foodies. But “in my day” it wasn’t about trends or whatever restaurant had the best brisket that week. It was about family. It was about my father rolling up his sleeves and teaching me something I didn’t know before. It was about learning that there are some things in life that you’re never going to perfect, but you should keep trying anyway, because the results can be delicious. It was about the honest, pure connection that comes with making something that’s entirely your own.

Even now, it’s an organic, growing, unpredictable thing, but that’s just the way we like it, and that’s why we keep doing it. My father and I don’t have a massive number of things in common, but when we barbecue, it’s beautiful. You can’t recreate that with a recipe. That is Magic.