EAT THIS CITY  takes us to the best places to eat in a different city each week. This week, we go to Brooklyn with Chef Nick Padilla!

How to boil down Brooklyn in a sentence or two? There are so many enclaves — each with their own unique identity — that BK feels less like a borough and more like an autonomous country.

A country where you can find beard oils, gluten free macaroni-and-cheese, back alley speakeasies, and babies with $50 haircuts. Visit Coney Island, the Brooklyn Bridge, and Prospect Park. Check out the home turf of Jay-Z and Biggie Smalls.

Yes, rents are rising. Yes, there’s a mainstream migration into neighborhoods that used to be edgy and cool. But make no mistake: Brooklyn still has the magic. It’s perfect for EAT THIS CITY. 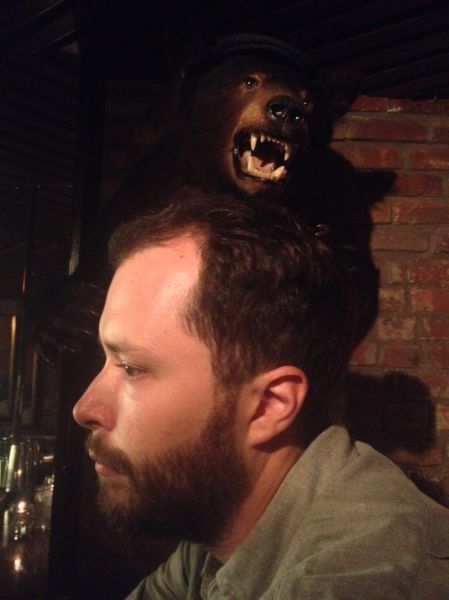 Meet Chef Nick Padilla. While studying philosophy in college, he took a job at a vegetarian café where all the cool kids hung out. Back then, it was just a job and he didn’t have great culinary aspirations, but Padilla kept working in kitchens and in time he discovered his passion for cooking.

Eventually he headed to culinary school, then cooked in David Chang’s Momofuku kitchens. When a real estate opportunity that Padilla couldn’t pass up presented itself, he launched Alameda in Brooklyn’s Greenpoint neighborhood. He was ready to be done working for other people and wanted a gathering place for his friends.

Padilla admits that the New York food scene is mega competitive and feels exhausting to keep up with — but there’s also no place he’d rather be. There is serious food culture and serious community. There may be too many Neapolitan pizza joints and pop up fad restaurants for his taste, but there’s also a lot of awesome things going on.

Without further delay, here’s your ticket into the too cool for school food world of Brooklyn, NY, led by Chef Nick Padilla…

It's all about the @pizza at @totonnos, as it should be. #EEEEEATS ?: @bypattylee

Picking a pizza place in Brooklyn is nearly impossible, way too much good stuff out there. But forget the new school, Neapolitan inspired pizzas with a delicate (soggy in two minutes) crust topped with “eccentric” and “seasonal” garnishes served by most of the places youths go these days.

Go to Totonno’s and get a pepperoni pizza and a coke, and then walk it off on the Coney Island boardwalk.

New York is not a taco town. You can get good tacos, for sure, but it’s not the way to go if you really want to have the New York Mexican food experience. Most Mexicans in New York are from around Puebla. The city of Puebla is filled with incredible colonial architecture, its university is one of the most prestigious in Latin America, and my god they make a damn good sandwich. Puebla Mini Market in Sunset Park is the Mecca of Mexican sandwiches in Brooklyn. It’s essentially a bodega filled with weird/awesome catholic paraphernalia, gross/delicious candy, really cheap brightly colored things, and the greatest sandwiches on earth. The sandwich itself displays an admirable structural integrity considering the sheer volume and variety of its contents. The people that work there are really nice, and if you want you can take it out to the park nearby and eat it in the sunshine.

Next time someone from California says there’s no good Mexican food in New York, feel free to roll your eyes with confidence.

I’d have to pick Yuji Ramen, because they’re the only place that serves a good ‘Asian’ breakfast that I know of. And I love Asian breakfast because it justifies all the sh*tty things I’m going to eat throughout the rest of the day.

Don’t eat at halal carts, it’s never worth it. Solber Pupusas in Red Hook near the soccer fields is pretty cool because you can get a delicious and enormous meal and drink for the price of a cocktail in a less remote neighborhood.

How do people eat this and then go play soccer? I need a nap just thinking about it.

There's about to be a special delivery!

Peter Pan Donuts in Greenpoint is amazing. It’s all Formica and pastel. They make sour cream donuts and it’s cheap. I think all the girls that work there are Polish, and they’re usually pretty b*tchy in the best possible way. When you order a dozen you have to call out the types of doughnuts you want with 20 people waiting in line behind you — and it’s pretty much impossible to call it out fast enough for them to not yell “And what else!?” like you’re f*cking senile. But then they tie it up with the string hanging from the ceiling and put it in that pink bag and when you’re walking home everyone’s eyeing you like, “Damn I wish I had some Peter Pan donuts!”

It’s the only time people eye you on the street unless you’re really fit, but if you were really fit you probably wouldn’t be walking around with a dozen donuts.

A lot of people don’t realize that one of the best chefs in the world serves an underpriced and highly contemporary tasting menu in Greenpoint. Daniel Burns is incredibly talented and the food he serves at Luksus — his small dining room inside the beer bar Torst — is consistently world class. He’s also a good guy, and I’ve seen him order the sour cream doughnut at Peter Pan, so he knows what’s up.

Just go to Grand Army Plaza for the Greenmarket and buy some vegetables. It’s a great farmer’s market in a beautiful setting. I forget which days of the week its open, but you can Google it.

Give us this day… Our daily #brunch Doors open at noon! ? @lctotten

The Brooklyn Star in Williamsburg has the best brunch in New York City. It’s just really, really good. And the drinks are really good. The tables are huge so you can order too much food and it’s cool. Cinnamon buns and biscuits are baked to order. Great for dinner too.

ICONIC FOOD OF THE CITY

Brooklyn has a lot of iconic foods, and it’s hard to choose one. I’d say it’s pizza, but that’s got its own category. In my neighborhood, one iconic food is smoked/pickled fish, which is very popular in both the Jewish and central European communities. Acme smoked fish makes some of the best product around. They normally only do wholesale, but on Fridays they open it up to regular people, and you can stand in line to taste and buy some of the best preserved fish around. Pickled herring, smoked salmon, bluefish and mackerel, whitefish salad, you name it. It’s all really good, and it’s cool that they let you taste before you buy with most of the stuff.

It’s a traditional style of food for a lot of the local ethnic communities in Brooklyn, and it’s great to hang out in line with all the different people waiting to stock up for the weekend.

Peter Luger is the weirdest restaurant in New York City. It’s like they aren’t even trying. I’m pretty sure they cook the steak on one side only under a broiler on the plate they serve it on. Why is the plate so hot? There is no way they’re resting these things. They have an appetizer of tomatoes and onions that is literally just sliced tomatoes and raw sliced onions, unseasoned. The creamed spinach is pretty good but not as good as at St. Anselm in Williamsburg. The wine list sucks, just get a martini. What’s odd about this ‘culinary experience’ is that I crave it and keep coming back for it. It’s really one of the best meals you can have, despite everything else.

One other thing: don’t be an asshole and wear jeans and a t-shirt and sneakers. Put on a sport coat and tuck your shirt in for Christssake.

Oh, you wanted a vodka soda? Here's a gin and tonic.

Nachos at the Commodore. Their cheese sauce is really good, the topping to chip ratio is perfect, the portion size is absurd, and they serve tiki drinks.

I’ve never not felt like sh*t the next day.

Breakfast at Tom’s Restaurant, which is a diner in Prospect Heights. I think the real medicine here is the environment. It’s the quintessential neighborhood diner, all the food is good and utilitarian, and they have decent coffee. Also, they do classic soda fountain drinks like egg creams and cherry lime rickeys which are great for a hangover (assuming you don’t just want to give up and just start drinking again).

I hate to shamelessly self-promote, but Alameda is pretty good for that. We get a good amount of internet dates. The lights are on a dimmer. Achilles Heel right down the street from us is also a top notch date spot, with solid cocktails, wine and food.

RESTAURANT RUN BY A FRIEND

Meat Hook sandwich is one of my favorite places to eat. It’s definitely in the running with Defonte’s and Brennan & Carr as one of the best sandwich places in town. Brent and Ben are great guys, and their butcher shop a few blocks away is one of the most beloved businesses in Brooklyn.

See you next week!