Top Shelf: Let Us Teach You How To Make A Mean French 75

In a world of nearly infinite cocktail options, I find myself on an unending quest. That is, to find a sweet-tart drink that still has enough of a booze kick to be taken seriously. It’s surprisingly difficult — especially given the fact that as a drinker, I’m not so much a creature of habit, and I’d prefer not to drink the exact same thing every night. Too many cocktails sway one way or the other; either they’re saccharine enough to have come from a slurpee machine, or strong enough to give me a contact buzz as soon as the glass is set down.

That said, there’s one cocktail that, made right, I could probably drink forever. Enter the French 75. If the French 75 was a person, it would be sweet and bubbly enough to attend your grandma’s garden party. But if that party ran late and you had to walk home through the tough part of town, it would pull brass knuckles out of its Louis Vuitton purse, slide them on, and say, “Let’s do this.”

Where did this drink come from? Given its qualifications–it’s like the best friend you never knew you needed and wanted in drink form. So, why isn’t it more popular?

I talked to Booze Traveler’s Jack Maxwell to find out a little more.

It’s interesting…you have your gin, a little lemon juice, some simple syrup, and then you have a champagne floater on top of it, which is really interesting, because you’d think champagne would hold its own, that you wouldn’t mix it with another alcohol. So that’s an interesting drink to me. 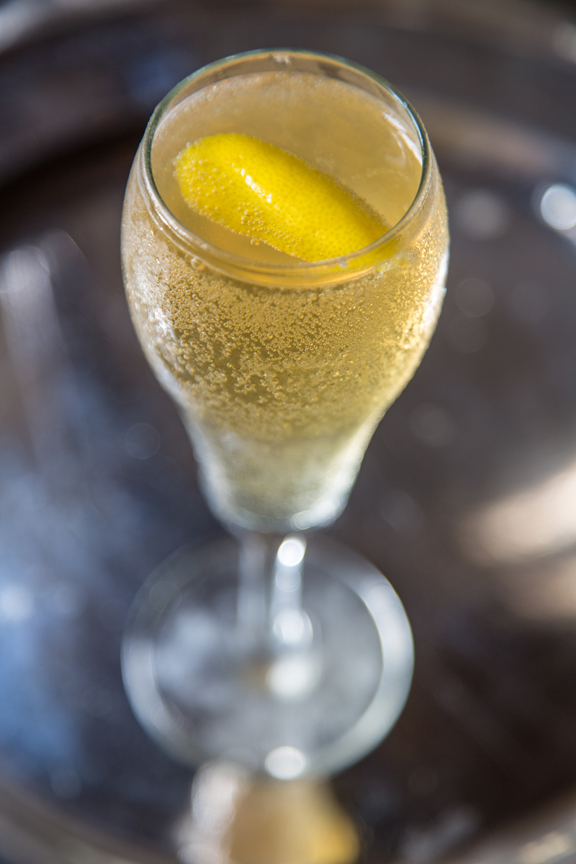 It is indeed an interesting drink, as its pedigree, which is just on the right side of mysterious. It’s said to have developed over the 1920s, and according to cocktail historian David Wondrich, first appears in print in 1927, and from there, once more in 1930, in the Savoy Cocktail Book, where the recipe really took off. Multiple cocktail historians credit barman Harry MacElhone with, if not the creation of the French 75 itself, at least with the creation of its progenitor, and there’s more than a few folks who believe the drink gained a wide and popular following at his eponymous New York Bar, which yes, is in Paris.

Whoever created it–and Wondrich suggests that it wasn’t so much as created in the 1920s as named–it gained a wide following, not just in Paris, but in America during the prohibition. In fact, Wondrich points out in his discussion of the cocktail that it has the distinction of being the only classic cocktail to have been born during the dry period. That’s more than enough of an endorsement for me, but if you still need convincing, there is always the simple fact that it was named for a fast-firing, accurate French field gun, because that’s exactly how much of a punch it’s got.

In researching the French 75, I found myself developing a powerful thirst for one, and my research lead me to the perfect place for the cocktail: Arnaud’s, located in the heart of the French Quarter, New Orleans.

Arnaud’s has existed since 1918, which, for those of you playing at home, is about the same age as the French 75 itself. It’s also home to the French 75 Bar, which is helmed by head bartender Chris Hannah, who was a finalist for the James Beard Award for best bar program.

This is clearly the place to go for this classic cocktail, but if you can’t head to Arnaud’s in person any time soon, you’re in luck. Chris Hannah was more than happy to share his tips and tricks for making a great drink.

So, what makes for a really good French 75? How can I make sure that when I make this at home, it’s going to come out delicious?

Arnaud’s makes its French 75 cocktail with cognac, not gin. There are many stories about the original recipe of the cocktail. It was named after a French artillery piece and originally created with cognac. The drink was popularized by Harry’s Bar in Paris. The Savoy cocktail book is noted as having the first published version of the French 75 cocktail, using gin, so most adopted this as the original version. At Arnaud’s, we believe the cocktail was created with cognac first and prefer the taste with our recipe here at Arnaud’s French 75 Bar. As the French 75 Bar has become more and more popular, so has our preparation, and I think that is why it is seen that way in New Orleans and other areas of the world.

What are some missteps a home bartender might want to avoid when making this drink? Any common mistakes you see in the preparation of this cocktail?

A common misstep would be to add an incorrect amount of either of the four ingredients involved in the cocktail, as well as buying store-bought juice rather than fresh. One medium sized lemon can make four French 75s easily and so buying the pasteurized juice from the store doesn’t really make much sense, monetarily.

And on the topic of spending, do buy a good bottle of Cognac, most VS will do. Practice your own simple syrups at home; you’ll need them for other cocktails eventually anyway and always keep them refrigerated. Don’t overdo it with the champagne; 2 and 3/4 of an ounce at the most. The brightened Cognac, or gin with the fresh lemon and sugar, and the topping of good sparkling wine are all the stars of the French 75 show together.

Ready to try a French 75 of your own? Chris Hannah shares a recipe: