This Woman Lost 165 Pounds After Her Family Died Of Obesity, And She’s Being Very Honest About The Experience

When Mary Maxwell was 2, she lost her mother to an obesity-related heart condition. By this time, she’d already lost her father to cancer (before she was even born) and would soon mourn the death of her aunt, who also lost her life to an obesity-related illness at the age of 26. But despite what you might believe, this didn’t force Maxwell to take a good, hard look at her life and decide right then and there that she’d make sure to be as healthy as possible. In fact, according to Maxwell, when she faced the grief and pain of all that she’d lost, food became not only a comfort, but a friend. And why wouldn’t it? Eating is what many of us do when we are sad, angry, or dealing with any number of complex feelings that we might not otherwise be able to deal with. By the time she was 19, Maxwell weighed over 300 pounds.

Like many, Metro reports, Maxwell didn’t just see food as a friend, though. To her, it was also an enemy. And while she tried to curb her eating and work on her health, she struggled with her weight constantly. And it didn’t stop people from bullying her for what she looked like:

She says she was ‘heavily bullied’ as a teen. ‘Adults would gossip about me, ‘forget’ to invite me to work gatherings and I even noticed it in clothing stores,’ she remembers. ‘I would walk in and magically all of the sales associates would disappear.’

At 21, Maxwell decided that she needed professional help — if she was going to lead a long and healthy life with her boyfriend–and underwent gastric bypass surgery. Today, four years later, she weighs 150 pounds. In most cases, the story would stop there–Maxwell would be seen as a success, be celebrated for a bit, and then forgotten. But she’s not just talking about the fact that the gastric bypass changed her life, she’s also also taken to Instagram to document the fact that life isn’t all sunshine and rainbows when you’re thinner, people don’t like you more (it can be the opposite), and surgery isn’t the miracle the make-over shows make it out to be.

Here’s what Maxwell posted to her account four days ago, detailing her account of her struggle not only with her physical transformation, but with the mental one: [UPDATE: The picture is gone as Maxwell has turned her account private, but you can read the text below]

Here’s a picture of Maxwell’s transformation via her GoFundMe page: 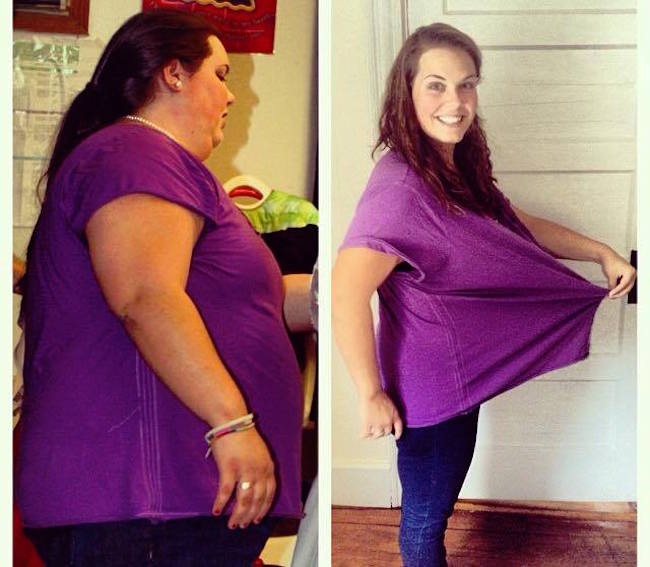 I lost weight trying to impress people, people who didn’t even matter. I lost weight hoping to show myself that I would be worthy of love and be accepted by my peers. One major thing that I’ve learned in life, losing weight doesn’t not make people like you more, I promise! If anything, I’ve found out that people who I thought were on my side thought when I lost weight I became conceded, cocky and full of myself because I FINALLY felt happy with my appearance and finally was ok with having my photo taken. People who I thought were on my side became jealous and backstabbing after I lost weight. Now that I’ve lost weight and unfortunately gained some weight back, my eyes have opened to who really cares about me and who never did to begin with.

Weight is weight, your looks will always change. The way others view you will always change and it’s none of our business how people feel about us. I view this before picture in true jealousy of who I use to be. I wasn’t trying to impress people, I wasn’t losing weight in order to be liked, I wasn’t trying to fake an image. I was me, Mary! HOWEVER, I was depressed and mixed up! I may have been myself “looks wise” (if that makes sense) but I still struggled with demons and pain. Losing weight WILL NOT take those demons away and will not make you a different person. I still struggle with my looks (even at my thinnest), I still struggle with my mindset and my confidence. Losing weight is not only a physical transformation but a mental one in which I struggle with on a daily basis.

I am NOT afraid to show you who I was OR who I am. I am not ashamed of sharing my weight gain or confronting you all with my faults, I am human and that is nothing different than I have shown you for the 4 years I’ve had this IG account. I am not ashamed of the beautiful woman that I once was, even if I was over 315lbs. I was confident, always smiling, and knew I would achieve great things. Even though I am not at my thinnest, I still wear a smile on my face KNOWING that I am beautiful, confident and have achieved and will achieve many great things!

And, as BroBible points out, Maxwell, who’s no stranger to being in the spotlight, shares some of the harsher physical realities of all that weight loss as well. Like many others in her position, Maxwell’s dealing with a lot of excess skin she can’t afford to remove right now but also isn’t ashamed of talking about with her followers:

Maxwell’s story is important because it features a component we don’t always see. Television shows and news stories often leave us with the feeling that weight loss is the answer to everything, but Maxwell points out it isn’t. Health is what’s important, as is body positivity, and feeling comfortable with yourself.