Maybe I’ve been living under a rock, but this past weekend, I visited the M&M’s World near where I live and was disconcerted to discover that each color of M&M has its own personality. Red is the smug, all-chocolate leader of the group. Orange is the unwillingly pretzel-filled nervous wreck. Green is the sexy, long-lashed, boot-wearin’ lady of the bunch — which, when you think back on that rumor from back in the day regarding green M&M’s and the consumer’s level of sexual arousal, suddenly seems like a very sly in-joke.

Now we have further proof that Mars has a sense of humor. It comes from the answer that Twitter user Mic Wright received when he asked why M&M’s characters don’t mind being eaten.

That’s right. It’s because they know that their candy-coated flesh is melt-in-your-mouth tasty. They exist to bring you pleasure. They submit themselves to your taste buds in an act of cannibalistic self-sacrifice.

Or, in the words of Mic Wright himself:

Essentially, what Mars are saying is that the M&M characters are part of a death cult.

Wright’s tweet has received a lot of attention from others who are similarly baffled by the mechanics of the M&M’s Death Cult as he is.

@brokenbottleboy @pronounced_ing which brings up the even more disturbing question of how they know they taste delicious…?

@brokenbottleboy @mattdpearce So eating an M&M is like oral sex? Or is it more like a snuff film? (Or both?) 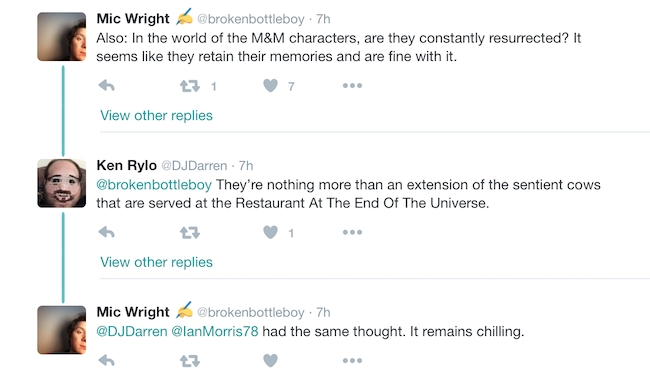 And there are those who question the actual truth of the response, given the commercial portrayal of M&M’s seeming terror at being eaten.

@brokenbottleboy Yeah. Pull up the Halloween commercials again and tell us that.

@brokenbottleboy @gemini6ice Wait, they DO mind it! There are multiple examples of them being scared at the idea of someone eating them!

@brokenbottleboy I don't know, this little fella didn't seem so happy about it ?? pic.twitter.com/AS8WUIlisa

For more on Wright’s thoughts, check out the article he wrote for Medium. “Behind the colourful shells, it’s a dark world for M&Ms,” he concludes. “And you thought it was a sweet life, right?” Maybe not, Mic. Maybe not. But it certainly hasn’t stopped you from eating their poor, sweet souls.

Letting them fulfil their destiny like the monster I am pic.twitter.com/eOPrYjY3eF

Combine all of this with M&M’s bedroom games and you have the profile of a pretty odd candy.