When it comes to imagining what life would be like upon getting stranded on a desert island, thoughts of Brooke Shields wearing next-to-nothing and Tom Hanks talking to sports equipment immediately flood the mind. But now, with the cast of TBS’ Wrecked suddenly unleashing all sorts of comedy on the castaway lifestyle, you can’t help but wonder:

How would I handle being stuck on a desert island?

Well, wonder no further. We caught up with real-life (self-imposed) castaway Lucy Irvine who spent 1982 stranded on the island Tuin off the coast of Australia. It all happened when a bored-with-life Englishwoman responded to an Englishman’s ad in Time Out magazine that simply read “Writer seeks wife for a year on a tropical island.” The man, Gerald Kingsland, was looking for a woman to live the Robinson Crusoe lifestyle with him… and then write a book about it.

Turns out, after the 13-month experience, publishers were way more interested in Lucy Irvine’s account, which eventually birthed a best-seller and a movie named Castaway (not the one starring Hanks and Wilson).

Irvine, now 60, spoke to us about her one-of-a-kind adventure from a peach field in rural Bulgaria where she now lives. As you can see, the remote island lifestyle maybe isn’t all it’s cracked up to be.

Tell us how you ended up as a self-imposed castaway on an island.

I was looking for an adventure at the time. I had a very boring, routine job as a tax clerk. Every lunchtime I’d go to the library and look for something that might appeal in the direction of travel. Then I saw this little advert in Time Out which was quite a wacky publication, which said, “Writer seeks wife for a year on a tropical island.”… It was beautifully brief and told an enormous story in that one line. I thought, “Oh, yeah. I’d like to do that.”

During your interview to be the “wife” on a deserted island, what was the selling point that got you the gig?

There were 300 other candidates. There was a lot of competition… he said that what he was looking for was somebody who’d have social ideas about what life would be like on a desert island, not a total airhead. If you’re going to take somebody to a desert island, whether you’re a man or a woman, what’s more preferable, suitability or desirability? It’s a tricky one.

What’s it like to be naked for virtually a year?

“You stop thinking about sex all the time with somebody’s who’s naked when they’re naked all the time.”

What do you fantasize about when you’re stuck on an island that long?

If it comes to fantasies, I have to say that dinner fantasies way outweighed the sexual fantasies. We began to sort of share all our food fantasies and we started with the Sunday lunch, the roast with the potatoes and the gravy and all that and ice cream, potato chips. You name it, we probably named every food we’d ever encountered on that island.

Is it tiring to have to find all your food?

Yeah, it’s the main focus of the day. You get up in the morning looking at the state of the tide immediately. Where are the sharks going to be? Shark was very, very easy to catch. So we tended to get quite a bit of it… You’d just focus the whole day on just how you were going to survive.

What did you arrive on the island with?

It was laughable. I mean, not funny ha-ha maybe, but when I look back, I think, “God…what a pathetic set of stores.” Of course, being British, we took teabags. How could we possibly survive for a year on an uninhabited desert island without teabags? We ended up smoking them.

Was Tom Hanks’ relationship with the volleyball in the movie Cast Away a credible portrayal?

Well, when I saw that movie, I thought, “Yeah, I can, in a sense, relate to that,” because I had a really good buddy that I talked to on the island. Gerald and I didn’t actually talk that much, but I talked quite a lot to a lizard called Oswald and another one called Bronzie. So, yeah, I think that it’s quite possible if you were on your own.

Was money a factor at all?

I’ll tell you what use it was, we had a few coins and we tied them to little flags and used them as weights to get the fishing lines out. It’s worth its weight if nothing else. A few notes that we had, cash notes, were going to be eaten by white ants and some were nibbled away already at the edges. So it became kindling for the fire or Rabelais practice. He was the person who invented more than a 100 different kinds of ass wipe.

I heard that Gerald wanted off the island sooner than you?

I wanted to fulfill my personal promise to myself to stay this year on an uninhabited desert island. So I developed a third character on the island; a kind of alter ego who had a voice of her own and wore pretend clothes, which he liked because I knew the sort of clothes he liked, sort of really old fashion man stuff like stockings with lines up the side. I’d draw that with a burnt stick from the fire on my leg for him and he really liked that. Mili. Her name was Mili. Millicent persuaded him to stay on the island for the rest of the year.

Is this sort of the ultimate blind date, this situation?

Yes, absolutely, no two ways about that. Ultimate blind date and ultimate relationship challenge… If there’s only two of you, you absolutely have to get on. There’s no laws on an island. If he decided to chop me up with a machete, nobody would’ve known that I wasn’t carried off by a shark. And if I decided to poison him with a bean I found on the island that was poisonous, nobody would have known. There’s no checks and balances.

“There’s no laws on an island. If he decided to chop me up with a machete, nobody would’ve known that I wasn’t carried off by a shark.”

Did you get rescued by request?

There is one very funny thing about this little escapade. It was a Torres islander that dropped us off on the island in the first place, because the island came in under their territory and we thought that they understood that we were going to be there a year, and so we said goodbye. It turned out later, they came and found me when they were fishing. They weren’t looking for us at all. They couldn’t believe their eyes, not because I didn’t have anything on my top… no islander women wear anything on their top. But that we were still there. It turns out they thought we were [initially] just spending the weekend.

If you could give advice to the characters on Wrecked who are stranded on a desert island, what would it be?

Get on with one another, if you can. Learn the state of each individual here. You may find that someone was a born leader in a corporate situation and is absolutely useless with a fishing rod. It’s the guy who’s good with the fishing rod — or who might invent a fishing rod — if you haven’t got one. This wailing and bemoaning your state isn’t going to get you anywhere. It’d be far better to go and find a supply of water rather than standing around, saying, “Oh, I can’t survive without X, Y, Z,” because you’re not going to have it… You spend all your time just trying to get your next meal. It’s a complete myth that people on a desert island lay about sunbathing.

Check out ‘Wrecked’ on TBS Tuesdays at 10/9c and see if they actually heed this real-world castaway’s advice. From the shot below, I’m guessing they do not. 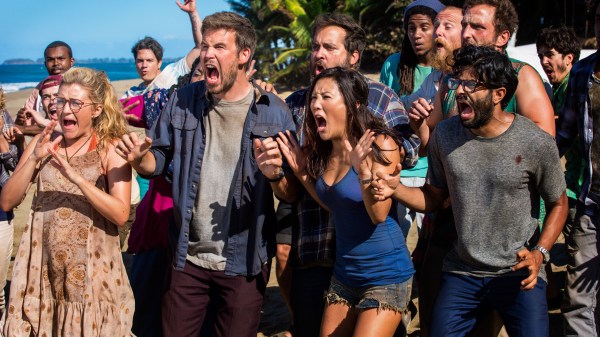