MARTIN: If there’s an undeniable truth to this country, it’s that people love chicken wings (vegetarians and vegans excluded, of course). I’m talking real chicken wings too, none of this boneless stuff. As my podcast cohost, Robby Kalland, and I have discussed multiple times, boneless wings are not wings. They need a rebrand. And we have suggested Dang Nugz on numerous occasions.

But one thing I’ve seen folks struggle with is which flavor to order. It’s a stressful venture, one that if ordering in groups, can end friendships. I’ve seen it happen. Waste a critical five or 10 wings with a bad flavor, and you’re out. You’re not invited to wing night ever again. Go to a place with a bad spicy garlic sauce, and we’re never coming back again one star burn this trash wing house to the ground.

The quality of the wing itself – size, amount of meat, the right texture – is huge. Lots of places don’t take that seriously enough. Flavors can take it over the top. That’s what makes a chicken wing, well, a chicken wing.

So we’ve taken it upon ourselves to rank flavors. It’s the summer, and it’s National Chicken Wing Day, and all of this counts as sports because wings are the best food to consume while watching people be athletic.

I’ll let you have the first pick, Brian. That’s how much I care about you. Choose wisely. That knight from The Last Crusade is staring you down as we speak. He freaking loves wings.

Let’s not overthink this. “Hot” is the clear number one. It’s simple, straightforward, and classic. Maybe after years of eating them they’re not as fun as, like, wasabi honey dusted ancho chile wings with a parmesan avocado glaze or whatever, but they’re still the king. The king doesn’t have to try hard to be fun because the king has power, and power is its own fun.

Semi-related: Do you remember where you were when you learned mild sauce was just the regular hot sauce with twice as much butter to cut the heat? I do. I was in the kitchen at the McFaddens in the Phillies stadium, on my first day of a summer job as a food runner. It blew my naive little mind. 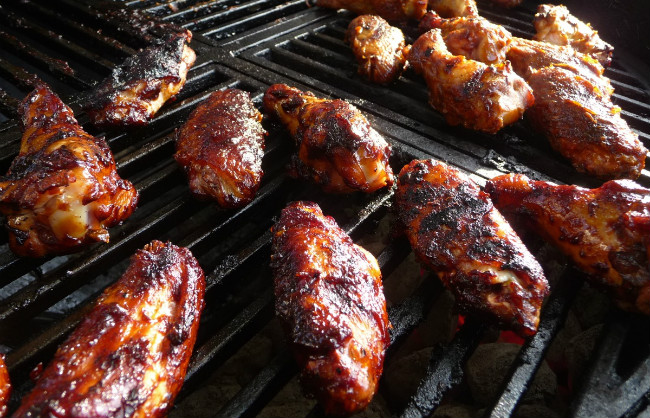 Since you took hot, and hot is the best wing flavor, and varying degrees of hot (between “mild” and “oh my god I might die”) are all the same, I needed at least some consolation. Normal BBQ wings are too sweet for me, and you end up with that sticky sauce that’s all sugary and destroys any wonderful sense of tasting the chicken you might get. The fun of hot BBQ is it cuts through that sweetness, and finishing them on the grill (or something similar) takes away even more of that sugary sense and gives you a char that helps the wing soar like an eagle.

The other thing, and this is important when ordering wings everywhere, is that it’s tough to screw up either of these first two picks even at a bad restaurant.

BRIAN: ROUND 2, PICK 1 – Some sort of spicy thing with mango or maybe pineapple

It’s dawning on me right now, after we agreed to draft wing flavors, and after we started drafting them, that I just order hot wings like 95 percent of the time and don’t have hard opinions on other sauces. There are others I like, but now I’m sitting here thinking about if I like them enough to take them in the second round and I’m like “Hmm, nah.”

We’re gonna with a generic sweet and spicy sauce flavored with either mango or pineapple, because I am the type of gullible rube who will let you charge him $20 for a plain chicken breast if you put $0.65 worth of mango salsa on it. Sweet and spicy is good. So good, in fact, that scientists probably should have figured out how to grow a spicy pineapple by now. WHAT ARE YOU DOING IN THOSE LABS, SCIENTISTS?

Oh, trying to cure the world’s illnesses? Well now I feel silly. You can slide “grow a spicy pineapple” to number two. 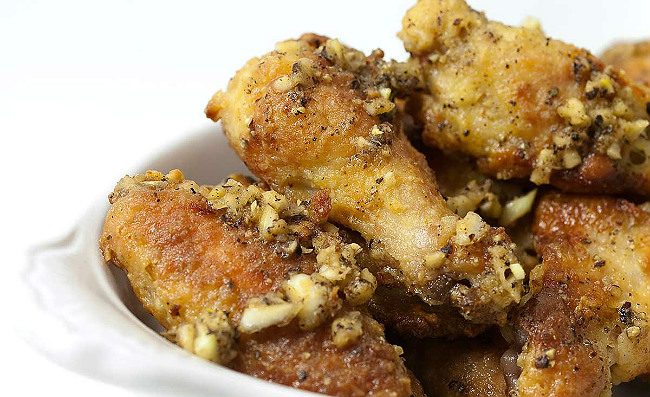 It’s weird to say anything doused in hot sauce and garlic could be a palate cleanser, but it somehow works. When you’ve got a bunch of different wing flavors on the table, the spicy garlic wing is there as a comfort. I pretty much love anything with lots of garlic (sorry everyone) which is good because I guess I’m not a vampire and I worry about that sometimes. And the spice keeps it from being too one note. It’s a wing my friends don’t think about much when we’re splitting flavors, but I like to have five to 10 of them on hand in a group to break up the intense heat of super spicy wings, or the weirdness of out-there flavors. These are the Tim Duncan of wings.

I went spicy in Round 1, then spicy and sweet in Round 2, and now I’m all-in on sweet with no heat. If you were to graph my picks with one axis for sweet and the other for spicy, you’d have a big X so far. I’m not sure it’s even possible to keep this trend up. How can I keep getting less spicy and more sweet than honey BBQ? I’m going to need to adjust course in the next round or this will end with me selecting, like, Candied Mayo or something.

Anyway, my reasoning: After maybe a dozen hot wings, it’s nice to shock the system. Cool things down for a second. Light up a totally different part of your tongue. It keeps your tastes buds on their toes, to the extent taste buds have feet, which as of five seconds ago I choose to believe they do. We’re changing pace here, like when a football team switches out its main running back for a shifty little fast guy.

What I’m saying is that honey BBQ wings are like Darren Sproles. That’s high praise.

I’m not typically a dry-rub fan when it comes to wings. I like my sauce, and I like my sauce to be covering every part of the wing (and I’ve gotten noticeably upset if a wing that’s I asked to be doused comes half dry with what looks like a French restaurant’s drizzle of sauce on it). But there’s something about a blackened wing with a little cajun dry rub that works. The spices need to be right. There have been times when the only thing I can taste is pepper. But when done right with the right char, this is the perfect wing to round out a few heavily sauced wonders. 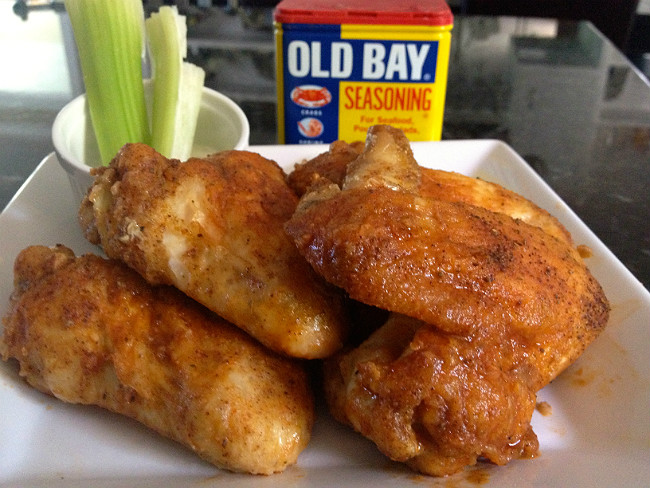 Fun fact about me: I would eat an entire high school biology textbook if it had Old Bay on it. I wouldn’t even think twice. So this pick is less about me selecting a good wing flavor than it is about me finding a socially acceptable way to hammer a bunch of Old Bay into my big stupid mouth. Worth it.

You run the risk of getting teriyaki sauce everywhere when you order these, and your hands sticking to every part of your body like that kid who used Sitck-Em in Little Giants, but it’s a risk worth taking. Teriyaki wings are tasty even if they’re a bit too sweet to be a primary wing, and they’re rounding my fantasy wing lineup into form. I’m surprised they’re still here this late in the draft, and maybe they slipped due to some negative whispering from teams trying to torpedo their stock and get a good deal, but I’m taking a shot. We have a good group of wings on this team, and we’re welcoming in teriyaki wings to try and win the Wing Bowl.