Eggloo Is The Internet’s New Favorite Dessert, But Does It Live Up To The Hype?

My quest to develop diabetes continued on Sunday with an unnecessarily long jaunt to funky Chinatown for one of New York City’s trendiest new treats — Eggloo, from the eatery of the same name.

My knowledge of Chinese food starts with Fried Rice and ends at General Tso’s Chicken, which means I had never heard of “egg waffles” prior to their newfound popularity. Naturally, I assumed it was an egg-flavored waffle because I’m an idiot. But as I learned on Sunday, it’s absolutely nothing like that.

The treat — popular in Hong Kong — is pretty much a regular sweet-tasting waffle. Where it differs from the ones they serve at Denny’s is that egg waffles are made of small, detachable balls which makes it easier to eat than regular waffles (or harder if you’re a savage who prefers to scarf down your food).

Egg waffles are now experiencing a viral boost thanks to the intensely Instagrammable creations at Eggloo — which pair the detachable balls with a scoop of ice cream and then do the whole “insane toppings” thing.

Like the Black Tap and its absurd milkshake abominations, I assumed the viral-ness of Eggloo meant a long line, so I intended to get there a few hours before opening. That plan was dashed when I accidentally walked across the Brooklyn Bridge.

How the hell do you accidentally walk across a mile-long bridge? I don’t know, okay?! But it taught me never to skip breakfast again.

After walking for what felt like 40 days and 40 nights with gusty 40 mph winds pushing me along, and stopping to take some cool scenery pictures I’ll probably never print out, I caught a cab to take me back to the city and straight to Eggloo. I got there 15 minutes before opening to find no lines and nothing alerting me that this was a place open for business. I’m pretty sure I would’ve cried and fainted if that were the case, but it wasn’t: 10 minutes after my arrival, I saw a Chinese man enter the nondescript building. Soon after, three more people entered and they definitely didn’t look like workers. I ignored the “Closed” sign hanging in front of the building’s window and walked in to find the three patrons seated inside.

I ordered my $7 Eggloo made with chocolate egg waffle, a scoop of vanilla ice cream, and topped with Fruity Pebbles, M&Ms and cookies & cream clusters. What I really wanted was their Oreo topping, but I was told they were fresh out.

My cousin, who came along, also ordered an Eggloo and a pizza made with egg waffles (an egg waffle lightly — very lightly — sprinkled with a few pizza ingredients like herbs and pepperoni flakes). My cousin thought it was delicious, but I thought it was a travesty, and I’m the one paid to write about food. It tasted sweet. Pizza isn’t meant to taste sweet, and I will karate chop anyone who tries to tell me otherwise!

We left immediately after getting our orders. Eggloo is small as hell. Like, NYC apartment living room small, and it quickly filled up minutes after its noon opening. I counted 25 people by the time we got our food. It was uncomfortably packed in there and I couldn’t take it for another second.

Immediately after getting our Eggloos, we left and went across the street to Columbus Park. Nothing makes you feel more alive than eating ice cream with gusty winds in 20-degree weather while an old man sitting across from you constantly clears his throat of phlegm and hawks spit every few minutes. Oh, what a lovely spring day! 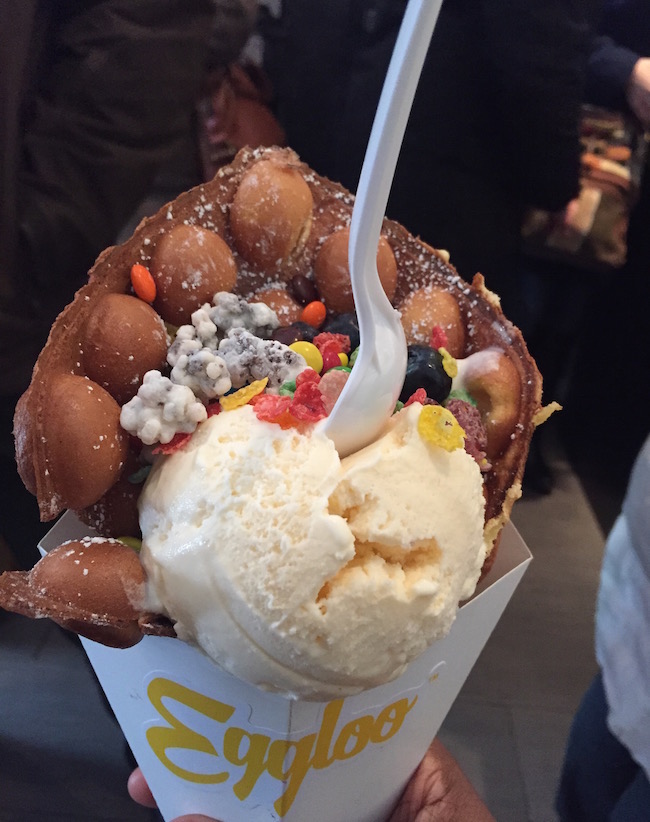 Something about the Fruity Pebbles topping tricked my brain into thinking I was 8 years old again and eating cereal while watching Saturday morning cartoons. It gave me a nice warm feeling to combat the freezing weather outside and the powerful winds. The chocolate egg waffle was deliciously fluffy, but so chocolate-y I had to eat an apple Airhead after to get the taste out of my mouth. It was almost too chocolate-y. Or maybe I’m so used to “fake” chocolate that I can’t appreciate the good stuff without globs of HFCS mixed in? Damn you, Big Food, I don’t know what to think!